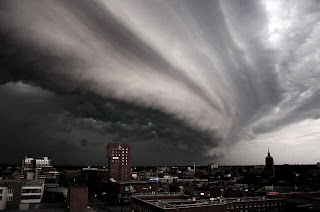 Thunder is the explosive sound produced by an ordinary lightning discharge. The lightning bolt heats the air around it so quickly (within a few millionths of a second) and to such a high temperature (about 10,000° C, or about 18,000° F) that the air molecules are pushed apart with great force, much like in an explosion. A wave of compressed air (a sound wave) moves out from the lightning bolt.

A lightning strike seems to be over very quickly, but thunder can last much longer, changing in pitch and loudness (see Sound). This happens for several reasons: the lightning bolt has an irregular shape; the air expands in all directions at once; lightning bolts overlap; and objects on the ground interfere with the sound. Because the lightning bolt is not straight and is at an angle to the vertical, not all parts of the bolt are the same distance from the listener, so sound from different places on the bolt reaches the listener at slightly different times. Also, sound from the far side of the lightning reaches the listener after sound from the near side. Lightning often occurs in groups of several bolts very close to each other, and sound waves from different bolts mix to form a continuous sound. Echoes from hills or other reflecting objects contribute to the rumbling effect.

Because sound travels more slowly than light, thunder is heard after the lightning is seen. The distance between an observer and the lightning bolt can be estimated by counting the number of seconds between the lightning and the thunder. The light reaches the observer almost instantaneously, but the sound travels at about 1.6 km (about 1 mi) every 5 seconds. Thunder can seldom be heard from more than 24 km (15 mi) away. (Encarta Encyclopedia)