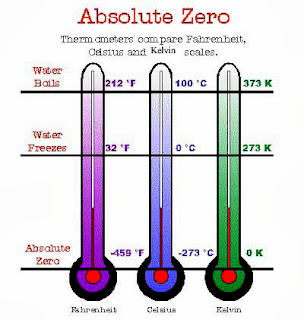 Five different temperature scales are in use today:
(1) the Celsius scale, known also as the Centigrade scale,
(2) the Fahrenheit scale,
(3) the Kelvin scale,
(4) the Rankine scale, and
(5) the international thermodynamic temperature scale.

The Celsius scale, with a freezing point of 0° C and a boiling point of 100° C, is widely used throughout the world, particularly for scientific work, although it was superseded officially in 1950 by the international temperature scale. In the Fahrenheit scale, used in English-speaking countries for purposes other than scientific work and based on the mercury thermometer, the freezing point of water is defined as 32° F and the boiling point as 212° F (see Mercury). In the Kelvin scale, the most commonly used thermodynamic temperature scale, zero is defined as the absolute zero of temperature, that is, -273.15° C, or -459.67° F. Another scale employing absolute zero as its lowest point is the Rankine scale, in which each degree of temperature is equivalent to one degree on the Fahrenheit scale. The freezing point of water on the Rankine scale is 492° R, and the boiling point is 672° R.

In 1933 scientists of 31 nations adopted a new international temperature scale with additional fixed temperature points, based on the Kelvin scale and thermodynamic principles. The international scale is based on the property of electrical resistivity, with platinum wire as the standard for temperature between -190° and 660° C. Above 660° C, to the melting point of gold, 1063° C, a standard thermocouple, which is a device that measures temperature by the amount of voltage produced between two wires of different metals, is used; beyond this point temperatures are measured by the so-called optical pyrometer, which uses the intensity of light of a wavelength emitted by a hot body for the purpose. (Encarta Encyclopedia)