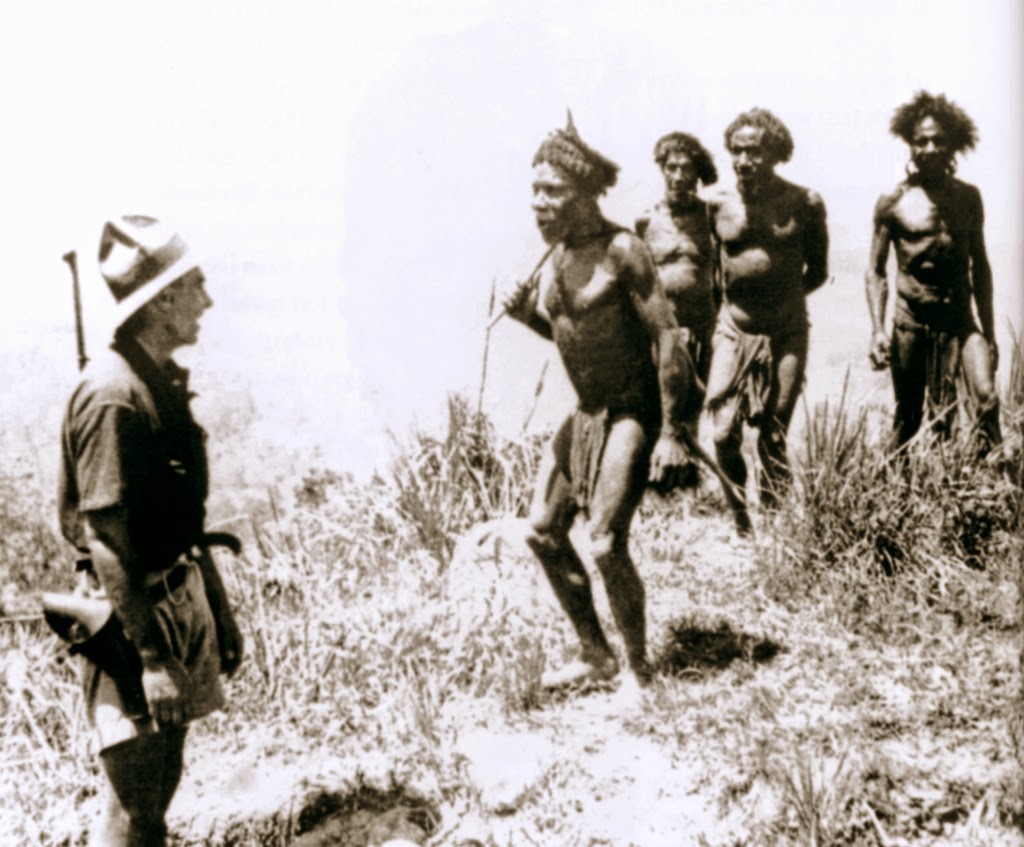 The Europeans began expanding over the globe from AD 1492 onwards and "discovered people long before there were any airplane overflights to alert them to an outside world. The last large-scale first contacts in world history will prove to be those that took place in the New Guinea Highlands, where from the 1930s to the 1950s patrols by Australian and Dutch government and army reconnaissance expeditions, miners on prospecting trips, and biological expeditions “discovered" a million Highlanders of whose existence the outside world hadn't known and vice versa - even though Europeans had by then been visiting and settling the coasts of New Guinea for 400 years.

Until the 1930s, first contacts in New Guinea were made by Europeans exploring overland or by river, and the first evidence of Europeans' existence to Highlanders’ was the physical arrival. Increasingly from the 1930s onwards, airplane overflights preceded the overland parties and warned Highlanders that there was something new out there. For example, the densest Highland population in western New Guinea, the approximately 100,000 people in the Baliem Valley, was "discovered” on June 23, 1938, when an airplane belonging to a joint expedition of New York's American Museum of Natural History and the Dutch colonial government, financed by oil heir Richard Archbold and exploring New Guinea for animals and plants, flew over mountain terrain previously assumed to be rugged, forest-covered, and uninhabited. Archbold and his team instead were astonished to find themselves looking down on a broad, flat, deforested valley criss-crossed by a dense network of irrigation ditches and resembling thickly populated areas of Holland.

Those final sites of large-scale first contacts of Highlanders with Europeans are described in three remarkable books. One, entitled First Contact by Bob Connolly and Robin Anderson, recounts the patrols by the miners Michael Leahy, Michael Dwyer, and Daniel Leahy, who were the first Europeans to enter some densely populated Highland valleys of eastern New Guinea between 1930 and 1935 - Lutheran missionaries had already reached the eastern fringe of the Highlands in the 1920s.) A second is Michael Leahy's own account, Explorations into Highland New Guinea, 1930-1935. The remaining book is The Sky Travelers by Bill Gammage, describing the Australian government patrol led by Jim Taylor and John Black that trekked through the western portion of the Papua New Guinea Highlands in 1938 and 1939. Both expeditions took many photos, and Michael Leahy made motion pictures as well. The horrified expressions on the faces of New Guineans photographed at the moment of first contact convey the shock of first contact better than any words could.

A virtue of the first and third of these books is that they relate the impressions made by first contact both on the New Guineans and on the Europeans involved. Both authors interviewed involved New Guineans 50 years after the events described. Just as older Americans will remember for the rest of their lives what they were doing at the moment of the three most traumatic events of modern American history - Japan's attack against Pearl Harbor on December 7, 1941, the assassination of President Kennedy on November 22, 1963, and the World Trade Center attack of September 11, 2001 – so, too, New Guineans over 60 years old in the 1980s recalled clearly how they as children first saw whites of the Leahy-Dwyer   patrol in 1930. Here is an account by one such New Guinean:

“At that time, these bigger men [pointing to two old men] - they're old now - were just young men, and unmarried. They hadn't shaved yet. That's when the white men came.... I was so terrified, I couldn't think properly, and I cried uncontrollably. My father pulled me along by the hand and we hid behind some tall kunai grass. Then he stood up and peeped out at the white   men.... Once they had gone, the people [we New Guineans] sat down and developed stories. They knew nothing of white-skinned men. We had not seen far places. We knew only this side of the mountains, and we   thought we were the only living people. We believed that when a person died, his skin changed to white and he went over the boundary to 'that place’ - the place of the dead. So when the strangers came we said: 'Ah, these men do not belong to the earth. Let's not kill them - they are our own relatives. Those who have died before have turned white and come back.'"
(Jared Diamond, ‘The World Until Yesterday’)