Fungus - They range from tiny, single-celled organisms invisible to the naked eye to some of the largest living multi-cellular organisms. 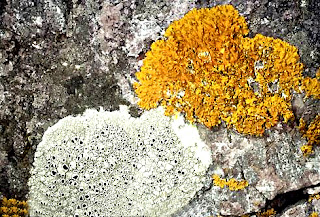 Fungi are any member of a diverse group of organisms that—unlike plants and animals—obtain food by absorbing nutrients from an external source. The fossil record suggests that fungi were present 550 million years ago and may have evolved even earlier. Today thousands of different types of fungi grow on and absorb food from substances such as soil, wood, decaying organic matter, or living plants and other organisms. They range from tiny, single-celled organisms invisible to the naked eye to some of the largest living multi-cellular organisms. In Michigan for example, the underground portion of an individual Armillaria mushroom, a type of fungus, extends more than 12 hectares (30 acres). Other fungi are among the longest-lived organisms on Earth—some lichens, a living partnership of a fungus and an alga, are thought to be more than 4,500 years old.

A large and widely distributed group of organisms, fungi perform activities essential to the functioning of all natural ecosystems. They are among the foremost decomposers of organic matter, breaking down plant and animal remains and wastes into their chemical components. As such, fungi play a critical role in the recycling of minerals and carbon. Fungi’s value to humankind is inestimable. Certain types of fungi, including several types of mold, have proven extremely valuable in the synthesis of antibiotics and hormones used in medicine and of enzymes used in certain manufacturing processes. Some fungi, such as mushrooms and truffles, are considered tasty delicacies that enhance a wide variety of recipes. Not all fungi are beneficial—some damage agricultural crops, cause disease in animals and humans, and form poisonous toxins in food.


Common fungi include mushrooms, puffballs, truffles, yeasts, and most mildews, as well as various plant and animal pathogens (disease agents), such as plant rusts and smuts. Some experts estimate that there are 1.5 million fungus species, of which approximately 100,000 have been identified. The unique characteristics of fungi led scientists to classify these important organisms into a separate kingdom, Kingdom Fungi (also known as Mycetae). Certain fungus-like organisms, such as downy mildews, water molds (also known as oomycetes), and slime molds, once classified as fungi, are now placed in the Kingdom Protista.

Fungi lack chlorophyll, the green pigment that enables plants to make their own food. Consequently, fungi cannot synthesize their own food the way plants do. In order to feed, fungi release digestive enzymes that break down food outside their bodies. The fungus then absorbs the dissolved food through its cell walls.

Depending as they do on outside sources for food, fungi have developed various living arrangements that enhance their opportunities for food absorption. Some fungi live as parasites, feeding on living plants, animals, and even other fungi. Certain fungus parasites injure plants and animals, causing millions of dollars of damage to farm animals, crops, and trees each year. For example, the fungus Ophiostoma ulmi, which causes Dutch elm disease, has killed more than half of the elm trees in North America since it was accidentally introduced there in the 1930s.

Fungi that obtain their food by breaking down dead organisms or substances that contain organic compounds, such as starch and cellulose, are called saprobes or saprophytes. While they are invaluable decomposers of organic material, saprobes can also cause food spoilage and destroy wood products. During the American Revolution (1775-1783), more British ships were destroyed by wood-digesting saprobes than by enemy attack. Some saprobes even grow in aviation fuels, where they breakdown the fuels, destroying their usefulness.

Some fungi also form highly specialized relationships with other organisms (see Symbiosis). For example, the roots of most plants develop a mutually beneficial association with fungi to form mycorrhizae. Mycorrhizae greatly increase the nutrient-absorbing capacity of the plant root—the fungus absorbs minerals from the soil and exchanges them for organic nutrients synthesized by the plant. Fungi also form mutualistic associations with various animals. For example, leaf-cutting ants cut pieces of leaves and bring them into their underground nests, where they feed them to certain fungi. These fungi primarily live in ant nests, and the ants eat nothing but the fungi. Some termites and wood-boring beetles use fungi to break down the cellulose in wood, making the wood easier for the insects to digest. Plant parasites such as rusts invade plant cells via specialized structures called haustoria that absorb nutrients from the cell. (Encarta Encyclopedia)