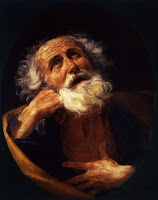 The sources of knowledge about Peter are the letters of Paul, written between 50 and 60 AD; the four canonical Gospels and Acts of the Apostles, written from about ad65 to the end of the 1st century; two canonical letters bearing Peter's name as author and probably written in the 2nd century by someone other than Peter; and a reference by a Roman presbyter named Gaius (flourished early 3rd century) to a “trophy” on Vatican hill memorializing the place of Peter's martyrdom or burial. In these sources several well-established traditions about Peter are found. He was called by Jesus to be a disciple, and he became prominent among the Twelve, often serving as their spokesman. At Caesarea Philippi he confessed Jesus to be the Messiah and was subsequently rebuked (see Mark 8:33) or praised (see Matthew 16:17) by Jesus for that confession. After Jesus' arrest, Peter denied being associated with him and suffered enormous self-reproach for having done so, but the first appearance of the risen Jesus was to Peter.

Peter played an important role in the early Christian church at Jerusalem, having received a special call to preach the gospel to his fellow Jews. In time, Peter came also to affirm the Christian mission to the Gentiles, whose chief advocate was the apostle Paul. Peter took part in a meeting in Jerusalem that focused decisively on the place of Gentiles in the church (see Acts 15). Against the faction of Jewish Christians who would have required converts to Christianity to be circumcised and to abide by Jewish dietary restrictions, Peter supported those who declared that the Christian message of salvation to all did not require that Gentiles adhere to specific legal and ritual precepts of Judaism.

Peter was viewed as the rock on which the church was founded, because Jesus so designated him (see Matthew 16:16-19). Three years after Paul became a Christian, he visited Peter in Jerusalem, and later had a sharp and bitter confrontation with him in Antioch; Paul had also to deal with Peter's influence in at least one of the churches Paul founded (the church at Corinth). Peter traveled about in his missionary activity, accompanied by his wife, and finally died the death of a martyr in Rome.

Source of Peter’s Name
Scholars have had considerable difficulty in advancing from these traditions to the historical Peter, but one of the most important of the traditional elements is also one of the most historically secure: Peter was the first to receive a revelation of the risen Jesus Christ (see 1 Corinthians 15:3; Luke 24:34). From this point other aspects of the picture of Peter have been developed, notably the change of his name from Simon to Peter.

From the references to Peter in the Gospels it is known that the name he received at birth and with which he grew up was Simon. The Greek word petros (“rock”) and its Aramaic equivalent, cephas, were not in use as personal names. “Peter” is thus a metaphorical or symbolic designation that came in time to function as the name of the man in question. The symbolic name in its Aramaic form may have arisen in connection with the affirmation that the resurrected Lord appeared first to Simon, that appearance and thus Simon himself serving as a sort of foundation stone of the church.

Peter’s Traditional Status
Peter undoubtedly had great influence in the church at its beginning, being consistently named first in the lists of the Twelve. The earliest image of him is, however, that of a remarkable missionary (fisherman), not that of an administrator. He was seen to have been entrusted not with authority, as such, but with a special vocation to preach the gospel (see Galatians 2:7). In time the image of the missionary was shifted to that of the pastor (shepherd), as can be seen from the two New Testament epistles that bear Peter's name, and from the appendix to John's Gospel (see John 21).

When the bishop of Rome came to be regarded as the bishop of the most prominent church in Christendom, the picture of Peter as a caring pastor was combined with the tradition of his martyr's death in Rome to serve as the basis of a theory of apostolic succession, according to which each Roman bishop was regarded as the successor to Peter, to whom Jesus had entrusted the keys to the kingdom of God (see Matthew 16:19). Beginning in the 11th century, the Eastern churches (see Orthodox Church) rejected the authority of the Roman bishop (pope), and opposition to the theory of papal succession and authority was a foundation stone of the Protestant Reformation. The feast of the Chair of St. Peter the Apostle is celebrated in the West on February 22, and that of St. Peter and St. Paul on June 29. (Encarta Encyclopedia)