The first discovery of the harmful effects of cholesterol 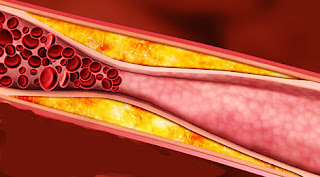 Some of the first evidence indicating that atherosclerosis was not simply a consequence of growing old but was rooted in our dietary intake of saturated fat and cholesterol came inadvertently from the Korean War. Soldiers who had been killed were autopsied, and medical researchers were stunned by what they found. More than 77 percent of the American soldiers had blood vessels that were already narrowed by atherosclerotic deposits, while the arteries-of the equally young soldiers of the opposing forces showed no similar damage.

At the time, it was thought that the pronounced differences in the conditions of the soldiers' arteries might be more a consequence of genetic predisposition than of their differing diet-styles. But this idea became quickly untenable when a large group of Korean soldiers were put on the U.S. Army diet. They rapidly developed significant increases in their blood cholesterol levels, an unmistakable sign of developing atherosclerosis.

Traditional nutritionists had thought highly of meat, dairy products, and eggs ever since the early animal experiments that showed rats grew faster on animal protein. As well, the first vitamin ever discovered, vitamin A, had originally been isolated from butterfat, which also added to the aura of supremacy these foods enjoyed.

But as a result of the autopsies, the possibility that dairy products, meat, and eggs might be seriously involved in heart disease now had to be taken seriously for the first time. Meat, dairy products, and eggs are the chief source of dietary saturated fat. Along with fish, they are the only sources of dietary cholesterol.

Stirred by the results of the Korean War autopsies, medical researchers undertook a major effort to learn more. From 1963 to 1965, a worldwide study of heart disease and stroke patterns was done, called the International Atherosclerotic Project. This truly mammoth undertaking involved examining the arteries of over 20,000 autopsied bodies throughout the world. The findings revealed an unmistakable pattern: people who lived in areas where consumption of saturated fat and cholesterol was high had markedly more atherosclerosis, more heart attacks, and more strokes.

It took a while for medical researchers to grasp the full implications of what was being learned, because the emerging truth required them to do a complete about-face from their well-entrenched assumptions. (‘A Diet for a New America’, by John Robbins)