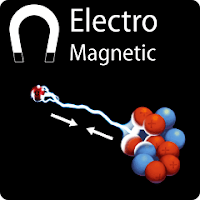 It is this force that links atoms and molecules to form ordinary solid bodies. Thus, if your elbow doesn't sink into the wood of your desk while you are writing, it is because the electrons in the atoms of your desk and of your elbow push against each other by means of electromagnetic interaction.

The relationship between electricity and magnetism was discovered in 1820 by Christian Oersted (Denmark) in an experiment during which he noticed that a magnetic needle was deflected by an electric current. Andre Marie Ampere (France) later generalized these observations, but it was James Clerk Maxwell (Great Britain) who, in 1864, formulated the general laws of electromagnetism and showed that light was nothing but an electromagnetic wave.

Since the 1930s a number of physicists such as P.A.M. Dirac (Great Britain) and Richard Feynman and Julian Schwinger (both U.S.) have developed the modem theory of electromagnetic interaction between electrons (with the exchange of photons). (‘Inventions and Discoveries’)