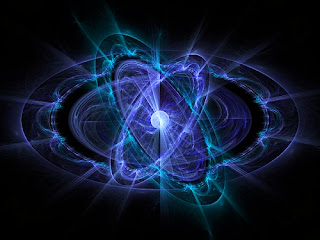 They're both nuclear reactions (i.e., they change the structure of an atomic nucleus) and they both represent what happens when Einstein's famous E = mc(squared)  is acted out. In fission, which is behind atomic bombs, nuclear reactors, and radioactivity, the nucleus of a big uranium atom is split into smaller parts when struck by a free neutron. Uranium is the fuel of choice because it "splinters" readily, releasing two or three more neutrons, which in turn strike and splinter neighboring uranium nuclei in a chain reaction. The result: energy; also, Chernobyl.

In fusion, which is behind starlight, sunshine, and the hydrogen (aka. thermonuclear) bomb, and which scientists hope someday to adapt to nuclear-energy production, the nuclei of two little hydrogen atoms are joined together, or fused, at temperatures approaching 50,000,000 Celsius, to form a single, heavy helium nucleus, ejecting high-speed neutrons (and impressively little pollution) in the process. In both fission and fusion, the atoms resulting from the splitting and the joining, respectively, weigh slightly less than the ones that went into the process. It's this difference in mass that has been converted into energy.

So why not forget dangerous, dirty fission and get behind controllable, clean fusion? Because fusion, while it works nicely on the sun, requires temperatures higher than we've in general been able to achieve here on earth except, so far, in the hydrogen bomb, which is triggered by fission -- in the form of an atomic bomb -- at its core anyway. It's true that in late 1993 an experimental fusion reactor at Princeton produced a few megawatts of power for a fraction of a second; while doing so, though, it used up more power than it produced. Nevertheless, a number of countries, including Japan, China, the United States, Russia, and members of the European Union [later joined by India and South Korea] started collaborating on an International Thermonuclear Experimental Reactor (ITER).


ITER (originally an acronym of International Thermonuclear Experimental Reactor and Latin for "the way" or "the road") is an international nuclear fusion research and engineering project, which is currently building the world's largest experimental tokamak nuclear fusion reactor at the Cadarache facility in the south of France. The ITER project aims to make the long-awaited transition from experimental studies of plasma physics to full-scale electricity-producing fusion power plants. The project is funded and run by seven member entities — the European Union (EU), India, Japan, China, Russia, South Korea and the United States. The EU, as host party for the ITER complex, is contributing 45% of the cost, with the other six parties contributing 9% each.

The ITER fusion reactor itself has been designed to produce 500 megawatts of output power for 50 megawatts of input power, or ten times the amount of energy put in. The machine is expected to demonstrate the principle of producing more energy from the fusion process than is used to initiate it, something that has not yet been achieved with previous fusion reactors. Construction of the facility began in 2007, and the first plasma is expected to be produced in 2020. When ITER becomes operational, it will become the largest magnetic confinement plasma physics experiment in use, surpassing the Joint European Torus. The first commercial demonstration fusion power plant, named DEMO, is proposed to follow on from the ITER project to bring fusion energy to the commercial market. (From ‘An Incomplete Education’, by Judy Jones and William Wilson; and ‘Wikipedia’)