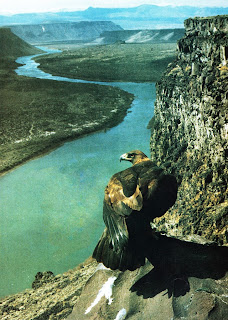 Though wise in so many ways, America's Founding Fathers were perhaps poor judges when it came to birds. By an act of Congress in 1782, they chose to adorn the Great Seal of the United States with the bald eagle, an undeniably beautiful bird, but also a mere scavenger and catcher of fish.

Presumably, the members of the Continental Congress sought a symbol of courage and independence to match their hopes for the infant republic; undoubtedly, they wanted a bird embodying the splendor of the new nation and its magnificent virgin lands. So how come they overlooked a choice as good as gold - the golden eagle, that is?

America's "other eagle" is more aggressive, more numerous, more skilled as a hunter, and even a bit larger than its white-headed cousin. Yet it has traditionally been overshadowed by the national symbol. Many Americans, particularly people in parts of the East, where the golden eagle infrequently flies, may not even know the bird exists. Meanwhile, in some areas of the West, the creature's taste for mutton long ago earned it the enmity of sheep ranchers. Today a symbol of the country's wide-open spaces, the magnificent raptor is also a lightning rod for controversy.

Weighing up to 13 pounds (6 kilograms) and with a wingspan of 7 feet (2 meters) or more, the golden eagle is one of the world's largest birds of prey. In North America the only larger raptor is the nearly extinct California condor, now confined to zoos. With that great size comes power, "truly awesome power," in the words of Mike Kochert, research leader at the Snake River Birds of Prey Area in Idaho. "Some smaller raptors may be more aggressive, but for pure energy on the wing," he says, " the golden eagle is tops. "

Soaring across stretches of North America, Central America, Europe, Africa, and Asia, the species is most abundant in places - like the American West - that provide unrestricted, panoramic views (for spotting prey) and consistent breezes (for easy soaring). Goldens breed in the seventeen westernmost states and in nearly all of the Canadian provinces. Biologists put the United States population at about 63,000 birds, including more than 17,000 breeding pairs. "The golden-eagle population is stable and healthy," says Kochert.

One reason for that success is that the species escaped the toxin scourge (of DDT and other chlorinated hydrocarbons) that severely reduced populations of bald eagles and other raptors. Predators suffer mostly from environmental poisoning when their prey sits at the top of a long food chain of other animals. Golden eagles, however, mainly consume grass-eating rodents (comparatively low on the food chain), and seldom receive high concentrations of poisons. They feed infrequently on waterfowl and fish , two types of animals known to accumulate toxins.

The big birds mate for the first time in their fourth year, and the bond often lasts for the eagles' entire 15 - to 20 - year lifespan. In late winter the golden pair claims a territory of several square miles, and prepares a grass-lined stick nest situated on a rocky ledge or high in a tree. Sometimes the nest becomes huge with reuse . One nest, on a high bluff near the Sun River in northwestern Montana, stands 21 feet (6.5 meters) tall - and is still growing.

The eagles' creamy buff eggs (usually two) are laid in early spring; after 45 days of incubation by the female, the chicks emerge wobbly and pale gray. In a few days, their down turns snowy white, and three weeks later, feathers begin to appear. By the time the eagle chicks are five weeks old, they are able to move about the nest. They may even attempt to rip meat from the one or two prey animals the male brings to the aerie each day.

The young take to the air for the first time when they are about two months old. Sturdy feathers have replaced their down, and rigorous flapping practice inside the nest has prepared their muscles for the inaugural flights. Clumsy at first, the fledglings soon acquire the skills that make the golden eagle an able flier.

In mating and territorial displays - and maybe even just for fun - soaring adult golden eagles sometimes close their wings and plummet like spent rockets. Before nearing the ground, the speeding birds pull out of their dive and climb - to do it all again. Observers have seen eagles add a prop to this diving game, dropping a dead grouse from a great height, then catching it before it hits the ground. (Funk & Wagnalls new Encyclopedia of Science Yearbook)