G7/G8 (Group of Seven/Group of Eight) 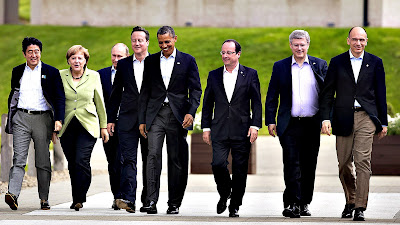 Formed in 1975 by the six biggest industrial democracies -- the United States, Japan, Germany, France, Britain, and Italy -- and joined by Canada a year later. Starting in 1991, the USSR, then Russia, began dropping by for post-summit conferences. In 1994 Russia became a regular visitor, and in 1998 it became a full participant in what now became the G8, although the G7 has continued to function alongside the formal summits, presumably just to confuse the average newspaper reader. These days, the G8 meets annually, and by turns, in the capital, another big-deal city (Montreal, Florence), or a jewel-like historic landmark or golf resort (Versailles, Williamsburg, Gleneagles) of the host nation, with everyone's finance minister (our Treasury secretary) and all the prime ministers (or presidents) in attendance, at which point it considers, and attempts to bring into line, matters of economic policy and planning, then schmoozes, often managing to work out an intractable problem or two over one of the six-course dinners prepared by the host country to show off the national cuisine. With old-style Kennedy-and-Khrushchev-type summit meetings largely a thing of the past, the G8 get-togethers have become some of the most important meetings in the world, real pileups of power and money at which issues as broad as terrorism and the environment are hashed out, often leading to the creation or resuscitation of some new international organization to "handle” the problem. (‘An Incomplete Education’, by Judy Jones and William Wilson)