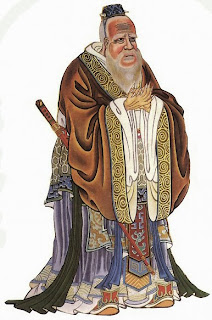 During China’s succeeding Warring States Period (481-221 B.C.), only a handful of states survived. Rulers of states used new technology (such as iron tools) and management techniques to mobilize populations for military service and state-supervised agricultural production. It was a time of population growth and increasing wealth despite near-constant warfare. As rulers looked for new sociopolitical ideas to enhance their power and security, state patronage of learning created a class of literate administrators, advisers, and teachers.

The first and most influential Chinese philosopher was Kongzi (551-479 B.C.), usually known by his Latinate name, Confucius. Confucius, along with later generations of disciples who elaborated upon his ideas (Mencius, Xunzi, and others) advocated a hierarchical society in which the ruler, aided by enlightened ministers, would serve as "father and mother of the people." The Confucians prized harmony, moderation, ritual, and historical precedent but disparaged law, which they saw as the enemy of virtue. Rival thinkers advocated strict codes of law and coercive punishments to control the populace (Shang Yang, Han Feizi); improved managerial techniques to make government more effective (Shen Buhai); frugality, universal love, and self-defense (Mozi); escapism (Yangzi, Zhuangzi); and government by a sage attuned to the rhythms of cosmic force (Laozi). In practice, government during the Warring States Period became increasingly bureaucratic and merit-based, rather than aristocratic and hereditary, as rulers adopted promising ideas and techniques from various schools of thought. (The New York Times ‘Smarter by Sunday – 52 Weekends of Essential Knowledge for the Curious Mind’)