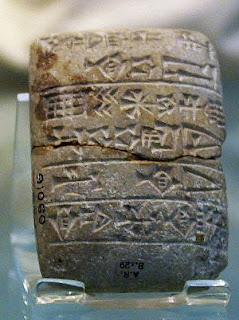 Numbers were first written in the 3rd millennium B.C., as is attested to by the clay tablets discovered in Susa and Uruk (currently Warka in Iraq) and those from Nippur (Babylon, 2200 to 1350 B.C.). The Babylonian system of numeration is on a base of 60. Our time divisions are a vestige of this. There was no zero; missing units were simply indicated by a space.

The ancient Mayan system was on a base of 20 - the number of fingers and toes. This was a position system and included a final zero which was not an operator.

In the 5th century B.C. the Greeks used the letters of the alphabet. For units of one thousand, the nine first letters accompanied by an inferior accent to their left were used This system, which had no zero, was used for a thousand years.

Babylonian numeration was perfected in the 4th century B.C. by the appearance of the zero in mathematical texts. The zero was placed either at the beginning of a number or within a number, but never at the end. The word zero comes from sunya, which means "nothing" in Sanskrit; it became sifr in Arabic and was Latinized into zephirum by Leonardo Fibonacci. It was fixed at zero in 1491 by a Florentine treatise.

The Hebrews and Arabs adapted the Greek system for their own alphabets. Calculations were then made using abacuses. Numbers were represented by pebbles -- the word calculation derives from the word calculus, meaning pebble. (Adapted from ‘Inventions and Discoveries’)