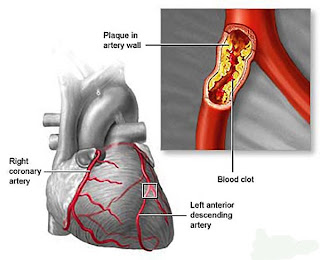 The human heart doesn't actually look very much like a valentine, but it is nevertheless a wondrous and beautiful muscle. About the size of a clenched fist, it begins to beat only a few weeks after conception and thereafter pumps forth the rhythm of our lives through every moment of our uterine and earthly existence. Only at the moment of our death does it cease.

This beating has a definite purpose: to pump blood to all parts of the body. The life of our very cells depends on the oxygen and nutrition brought to them by the flow of our blood. If for some reason any muscle did not receive a fresh flow of blood, it would quickly die.

Since the heart is also a muscle, it, too, must continuously receive a fresh flow of blood, and you might think that receiving a blood supply would never be a problem for the heart, since its chambers are always full of blood. But the heart is not able to directly use any of the blood contained within its pumping chambers, any more than a stereo amplifier can plug into itself. Instead, the heart muscle feeds from, the blood supplied to it through two specific vessels, called the coronary arteries.

In a healthy person, the blood flows freely and easily through the coronary arteries, and the well-fed heart keeps pumping away as it should. But if one of the coronary arteries, or one of its branches, should become blocked off and so be unable to supply the heart with blood, then even though the heart's chambers are full of blood, that part of the heart dependent on the blocked-off artery will die.

If a heart attack victim is fortunate, and the part of the heart that dies is small, he or she will survive, and the dead tissue will come gradually to be replaced by scar tissue. But if a larger part of the heart is deprived of blood, there really isn't very much that can be done to save the person's life. Many heart attack victims die within minutes of the unexpected seizure.

Heart attack victims often never have the slightest warning anything is wrong. There are no bodily symptoms to signal the oncoming disaster. They may have only that morning heard their physician pronounce them fit as a fiddle. But, then, suddenly, the victims feel a sudden, severe, crushing pain in their chests. Often the pain shoots down the arm, and sometimes it flares up the neck, particularly on the left side. There may be cold sweating, nausea, vomiting, and shortness of breath. The symptoms are accompanied by a feeling of being overwhelmed by enormous terror and dread.

Though heart attacks strike suddenly, and often without forewarning, they do not just happen. A heart attack is the inexorable final step of a slow and lengthy process. You can put cold water in a pot, put the pot on the stove, and turn on the heat. For a while nothing much will seem to change as you watch. But if the heat is high enough, at a certain point bubbles will appear on the surface of the water. You will see very little change all the while the water heats from 32 degrees toward 212 degrees. But then, suddenly, just as it approaches the threshold of 212, there are dramatic visible changes, and the water boils.

Similarly, the apparent suddenness of a coronary artery closing off and the consequent heart attack is actually quite misleading. In reality, for this final step to occur, our arteries must have been approaching "the boiling point" for some time.

The slow and steady process that takes place in our arteries and inexorably increases our heart attack susceptibility has a name. This process, which is, in fact, the deeper cause of almost all heart attacks, is called atherosclerosis.

Atherosclerosis is the process by which arteries gradually accumulate fatty and waxy deposits on their inner walls-thus reducing the size of the openings through which the blood can flow. The foreign deposits that adhere to the inner walls of the arteries are called atheromas or plaques.

When these plaques become advanced enough, the fatty contents of the deposits will rupture into the artery and form a clot. These clots may clog up the already reduced arterial opening and thus entirely prevent the flow of blood through the artery.

There could be no heart attack unless the coronary arteries had already become partially closed and irritated by atherosclerotic deposits. Atherosclerosis, the real culprit, is what must be eliminated to prevent heart attacks. (‘Diet for a New America’, by John Robbins)