How hot is lightning? 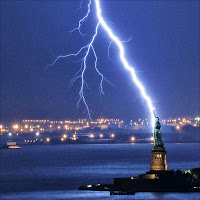 The temperature of the air around a bolt of lightning is about 54,000 Fahrenheit (30,000 Celsius), which is six times hotter than the surface of the sun, yet many times people survive a bolt of lightning. American park ranger Roy Sullivan was hit by lightning seven times between 1942 and 1977. In cloud-to-ground lightning, its energy seeks the shortest route to Earth, which could be through a person's shoulder, down the side of the body through the leg to the ground. As long as the lightning does not pass across the heart or spinal column, the victim usually does not die. (The Handy Science Answer Book, compiled by the Science and Technology department of the Carnegie Library of Pittsburgh)