Quantum theory – how it came about 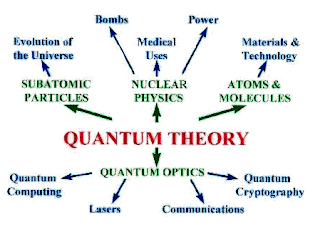 At the end of the 19th century, no law had been discovered to account for the phenomenon of heat and light radiation by a solid, white-hot body. In 1900 Max Planck (Germany, 1858-1947) guessed that radiation did not occur in a continuous fashion but in small discrete units, separate quantities or quanta. This discovery, which enabled scientists to explain heat radiation, turned physics upside down, especially in the sphere of classical mechanics, which became inoperable in the area of infinitely small quantities. Thanks to this theory, Albert Einstein (Switzerland, b. Germany; 1879-1955) explained in 1905 the photoelectric effect by showing that light, which comprises both waves and particles, moves by quanta, tiny packets of light, which were later called photons.

Niels Bohr (Denmark, 1885-1962) built on this quantum theory a model of an atom, describing in 1911 the movement of electrons inside the atom. This model enabled him to achieve remarkable results in the fields of the spectroscopy of gaseous matter and of X-ray physics. (‘Inventions and Discoveries’)