Bats - the only mammals that fly 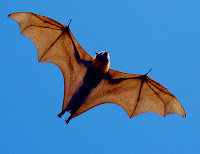 They eat insect pests. They pollinate useful plants, as bees do. Their droppings, called guano, are used as fertilizer.

Bats are mammals. They are the only mammals that fly. There are nearly 1,000 species of bats. They are found in all kinds of habitats. Bats live in tropical rain forests. They live in climates so cold that trees won’t grow there. Unlike other mammals, when bats rest they lower their body temperature to save energy. In very cold weather, they hibernate.

A bat’s wings are made of two layers of skin. The wings are supported by bones like those in a human hand. The thumbs have claws and lie outside the wings. The bat uses them to cling to the places where it roosts. These may be trees, caves, or even buildings. Muscles attached to the wings power the bat’s flight.

Bats come in many sizes. The largest is the Malayan flying fox. It is 16 inches (41 centimeters) long. Its wings span 5.6 feet (1.7 meters). The Kitti’s hog-nosed bat is the smallest of all mammals. It’s about an inch (3 centimeters) long—the size of a bumblebee—and is also known as the bumblebee bat.


Kinds of Bats
Bats are divided into two groups, megabats (large) and microbats (small). Megabats are called “flying foxes” because of their foxlike faces. They eat mostly fruit. Because they are sloppy eaters, they spread the seeds and pollen of fruits such as bananas, dates, and figs. This scattering helps the plants reproduce.

Most microbats are meat eaters. About two-thirds of all bat species eat insects. One common American species, the little brown bat, may eat 600 mosquitoes in an hour. Other microbats eat fish, frogs, small birds, lizards, and small mammals.

How do Bats Find Food?
It isn’t true that bats are “blind as a bat.” Most fruit-eating bats feed by day and can see very well. Some even see colors. Even microbats, which sleep by day and hunt by night, have some vision. They use it to find food. They also use smell and, especially, hearing.

Bats send out short pulses of sound. The sounds are usually too high for people to hear. The sound waves spread out in front of the bat. They strike objects in its path and bounce back as an echo. This process, called echolocation, helps the bat find food and avoid bumping into things.

Vampire Bats
Then there are the famous vampire bats. There are three species of vampire bats, all in Central and South America. And yes, they do feed on blood, mostly that of farm animals. A vampire bat needs about two tablespoons of blood a day.

Even vampire bats have their uses. Their saliva contains a substance that prevents blood from clotting. Doctors use it to make a medicine for heart attack and stroke patients. The name of this medicine is Draculin.
(Adapted from Encarta Encyclopedia)