Mysterious Winds of the Mediterranean 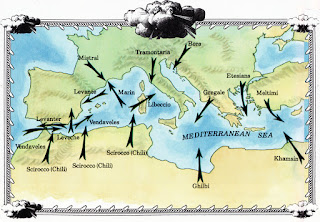 Winds have carried mariners across the seas since before recorded time. They so affected early seafaring that ancient sailors personalized them with names and built legends around them. And still today, of course, because winds influence weather on both a local and global scale, they affect our everyday existence.

Between the wind belts lie zones of still air - the horse latitudes between 30 and 45 degrees latitude, and the equatorial doldrums, which cover the area extending 15 degrees north and south of the equator. In the equatorial latitudes, the Sun's rays are nearly perpendicular to the Earth's surface, while in higher latitudes, the Sun's rays strike the Earth at an angle. The result is a greater concentration of solar energy per unit area in the tropics than in the polar regions, and therefore greater warming in the tropics.


In the equatorial doldrums, warm air rises, and it has little or variable sideways motion. In this area we feel little wind on the Earth's surface. As the air moves toward the poles, it cools. Much of it descends in the horse latitudes, creating a band of high pressure in each hemisphere. Similar to the doldrums, the downward- moving air in the horse latitudes has little or variable lateral motion. The horse latitudes were so named because early sailors to the Americas, stranded in these windless zones, threw horses overboard to lighten their load and save water for the passengers and crew.

When the descending air hits the surface of the Earth, some moves north and some moves south, creating the trade winds and the prevailing westerlies. The trades flow back toward the equator, where they are once again heated and rise. The westerlies flow toward the poles until they meet the polar easterlies. At the convergence zone, around 60 degrees latitude, air rises and splits into branches moving toward the horse latitudes or the poles.

Local Winds
The early mariners of the Mediterranean - or Middle Sea, as it was called in ancient times were affected mostly by local, regional winds rather than by the circumglobal winds . These regional winds are created and controlled by local weather patterns, high- and low-pressure systems that move across the sea and land. The air is heated and cooled, it picks up moisture or dust, and it moves over mountain ranges and descends into valleys, sometimes leaving rain. All of these factors affect the direction, strength , and characteristics of any given windstorm.

Today winds are named for the compass direction from which they originate - that is, the direction you face when looking into them. For example, the westerlies blow from the west, toward the east. Earlier mariners named winds based on a characteristic of the wind, or a personality they perceived that the wind possessed. They also named winds according to either the region the winds blew from or the region to which they would carry a ship. The same wind might be called by more than one name in different regions, languages, or historic periods. Many of these old names are still in use.

From Boreas to Notus
Ever since Odysseus' careless shipmates in Greek mythology opened Aeolus' bag and "the winds rushed forth," Middle Sea argonauts have been wary of strong regional winds that frequently interrupt the generally mild circulation pattern. Sailors have been clobbered by mistrals in the Gulf of Lions, soared before meltemis in the Aegean Sea, and been dusted by siroccos off the coast of Morocco.

The practice of naming the wind originated in antiquity and served as both a primitive meteorology and a forebear for the magnetic compass. In Homer's world, there were four original winds. Boreas, the north wind, blew from Thrace (a region of eastern Greece and northern Turkey that borders the northeast Aegean Sea and Marmara Denizi) and rolled up mighty seas. Notus, the south wind, brought sudden squalls. Eurus, the east wind, smelled of the Earth and tasted like bread. Zephyrus, the west wind, was often a storm wind and blew from the Elysian Fields beyond the Pillars of Hercules (present-day Gibraltar). By the 17th century, Homer's four directional winds had evolved into the 32- point compass card.

The most common regional winds in the Mediterranean are coastal land and sea breezes. These predictable winds are caused by the heating and cooling differential of land and seawater. The Sun can warm the land much faster than it can warm the sea, in part because water conducts heat well, and thus spreads it over a greater depth than does dry soil or rock. During the day the Sun warms the land quickly. The air over the land also warms, becomes lighter, and rises, resulting in low pressure over the land. Cooler, denser air from over the sea moves in to replace the rising warm air, resulting in a sea breeze. At night the land cools much faster than the seawater. Once the air over the water is warmer than the air over the land, it rises, creating a low-pressure zone over the sea. Air from the land moves out to replace the rising air, creating a land breeze.

Land and sea breezes augment or reduce the prevailing regional wind. Land and sea breezes are usually gentle, favorable, predictable winds. They are generally not named, and they are not the winds of which legends are made. A wide variety of regional winds with characteristic properties, provocative names, and notorious reputations plies the Middle Sea. These winds are spawned by diverse coastal topography, ranging from the Alpine mountains to the arid Saharan waste, and the climatic extremes of three bordering continents.

Breath of the Sahara
The desert inferno of North Africa is considered the birthplace of the sirocco winds, although the winds actually result when a depression, or low-pressure area, develops over the northern Mediterranean. These lows form on the downstream side of two mountain chains, the Alps and the Pyrenees, when northwest winds blow across Europe and the Balkans. Air, spiraling in toward the depression from surrounding areas, accelerates and becomes a wind. Known as the breath of the Sahara, siroccos are the winds heated by desert sands and drawn toward the north Mediterranean low from northern Africa. The heat and dryness of these winds can wither vegetation as they move over the coast. A particularly nasty sirocco along the coast of Libya is called (in Arabic) simoom, the poison wind. Depressions moving over Africa from the Atlantic stir up desert dust that may be entrained into the sirocco. The warm, dry air that crosses the African coast easily picks up moisture, and so may be extremely humid by the time it reaches the other side of the Mediterranean.

Siroccos have many local names. A legend in Morocco claims that an arifi wind will "heat the embers and scorch the Earth." In Algeria and Tunisia, the sirocco is called chili. Was it a tempestuous chili that wrecked Rome's entire fleet of 284 quinqueremes and sent 80,000 men to the bottom of the sea during the First Punic War? If you sail beyond the infamous "line of death" and into the Gulf of Sidra, you not only have to worry about Libya's Qaddafi, but also the local wind called ghibli. In Egypt the khamsin is a hot south wind that means sandstorm, reputed to blow for 50 hours straight.

In the western Mediterranean, the libeccio is a southwest sirocco that blows persistently for days or weeks, raising a considerable swell and rough seas. The leveche is a sirocco unique to the southeast coast of Spain. It is a dry, dusty wind that paints everything in its path with a red terra-cotta coating of Sahara dust.

Blowing from Low to High
During the summer months in the Aegean and Ionian seas, the blustery north winds are commonly referred to by their Turkish name, meltemi. The Greek equivalent, estesians, is derived from etos, or annual , and points to the consistency of these winds. The meltemi is created by the pressure difference between the deep continental monsoon low centered over northwest India and the eastward extension of the Azores high. Air moves at more or less a right angle across the pressure gradient between the high and the low, creating a wind.

Odysseus, Menelaus, and Agamemnon were all plagued by the meltemi as they tried to get home after the Trojan War. Only the rare absence of meltemi, a constant head wind for sailors traveling north to northwest, persuaded Jason to leave Limnos, the enchanted isle of women to the south of the Bosporus, and continue his pursuit of the Golden Fleece by sailing to the Black Sea.

Dangerous Winds
In mountainous regions, downward-flowing air often follows fjords, canyons, and river valleys, forming fierce regional winds. These winds, termed katabatic, are caused by different rates of cooling between air high up in mountains and the air down in valleys. The highest land cools the fastest in the evening and throughout the night. Cool, dense air is drawn downhill by gravity. These winds are often called fall winds. They are the source of several of the Mediterranean's most dangerous days.

In contrast to the katabatic winds, anabatic winds are upward-flowing air. On warm sunny days, mountain slopes warm faster than the valleys. As the mountain air rises, cooler air from the valley flows up the mountains to replace it, similar to a sea breeze. These winds are generally benign and do not greatly affect the winds in the Mediterranean.

The mistral, perhaps the Mediterranean's most infamous wind, wreaks havoc in the Gulf of Lions off the southern coast of France. Gale-force winds often reach out to the Balearic Islands. Strabo, the 1st-century geographer, called the mistral "an impetuous and terrible wind which displaces rocks, topples buildings, hurls men from their chariots and sailors from their ships." Mistrals are, in part, katabatic winds that form near the Massif Central in France during the winter season and funnel down the Rhone River valley to the coast. Their velocity, however, is increased as air is drawn toward the Mediterranean depression that also pulls the siroccos from Africa. Mistrals pour clear, cold winds into the Mediterranean. The tramontana and the maestro, cousins of the mistral , are fall winds. It is the confluence of the mistral, the tramontana , and the related wind out of the Carcassonne gap that makes the Gulf of Lions so dangerous. The marin, or sailor's wind, is another katabatic wind in the western Mediterranean that often follows on the coattails of a mistral.

Boras are cold fall winds that haunt the northern Adriatic Sea. Boras are capable of producing violent gusts and squalls, sometimes reaching 100 knots. They are truly heartless winds that often set in with little warning in the early morning hours. A gregale is a strong northeast wind that forms in the Balkans and reaches the central Mediterranean. In about A.D. 69, Saul, better known today as Saint Paul, was on his way to Rome to be tried before the emperor when his galley was lost, perhaps thrown onto the rocks off Malta during a gregale.
(Funk & Wagnalls Encyclopedia of Science Year Book)