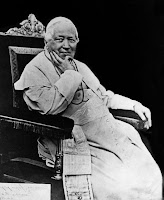 Pope Pius IX (1792 -1878) was the head of the Catholic Church from 16 June 1846 to his death in 1878. He was the longest-reigning elected pope in the history of the Catholic Church—nearly 32 years. During his pontificate, he convened the First Vatican Council in 1869, which decreed papal infallibility.

Few popes of modern times have presided over so momentous a series of decisions and actions as Pius IX. During his reign the development of the modern papacy reached a kind of climax with the promulgation of the dogma of papal infallibility.

It had long been taught that the church, as “the pillar and bulwark of the truth,” could not fall away from the truth of divine revelation and therefore was “indefectible” or even “infallible.” Inerrancy had likewise been claimed for the Bible by both Roman Catholic and Protestant theologians. As the visible head of that church and as the authorized custodian of the Bible, the pope had also been thought to possess a special gift of the Holy Spirit, enabling him to speak definitively on faith and morals. But this gift had not itself been identified in a definitive way.

The outward conflicts of the church with modern thought and the inner development of its theology converged in the doctrinal constitution Pastor Aeternus (“Eternal Shepherd”), promulgated by the first Vatican Council on July 18, 1870. It asserted that “the Roman Pontiff, when he speaks ex cathedra, that is, when in discharge of the office of pastor and teacher of all Christians, by virtue of his supreme apostolic authority he defines a doctrine regarding faith or morals to be held by the universal Church, by the divine assistance promised to him in blessed Peter, is possessed of that infallibility with which the divine Redeemer willed that his Church should be endowed.” The decree was, of course, retroactive, even though there were historical incidents that appeared to contradict the retroactivity, such as the condemnation of Pope Honorius I by the third Council of Constantinople in 680, which were cited by opponents of the decree. This opposition was, however, ineffective, and the dogma of infallibility became the public doctrine of the church. Those who continued to disagree withdrew to form the Old Catholic Church, which was centered in The Netherlands, Germany, and Switzerland.

Pope Pius IX also defined the dogma of the Immaculate Conception of the Blessed Virgin Mary, meaning that Mary was conceived without original sin.

Pope Pius IX was also the last pope to rule as the Sovereign of the Papal States, which fell completely to Italian nationalist armies by 1870 and were incorporated into the Kingdom of Italy. After this, he styled himself as the first "Prisoner of the Vatican". (Adapted from Wikipedia encyclopedia and Encyclopedia of Britannica)