What are mosquitoes good for? 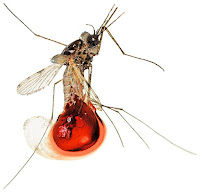 There are approximately 3,500 species of mosquito just a few rank among the deadliest creatures on Earth. They include Anopheles gambiae, which transmits the malaria parasite that kills hundreds of thousands of people each year. Historians believe the mosquito arrived in the New World on slave ships from Africa in the 17th century, bringing with it yellow fever, which has killed millions of people. Today the mosquito also carries dengue fever, which infects as many as 400 million people a year, as well as such increasingly threatening pathogens as chikungunya, West Nile virus, and Zika.

Mosquitos, like all other life forms, are part of a complex food web. Many fish feed on mosquito larvae, which are aquatic, and plenty of birds and spiders and other insects feed on the adults. Dragonflies and damselflies love mosquitoes. Frogs eat adult mosquitoes, tadpoles eat the larvae.

There isn't much love lost between people and mosquitoes. At the very least, these bloodthirsty insects are major annoyances, biting us with a persistence that can be maddening. If insects can be credited with evil intent, mosquitoes seem determined to wipe the human race out. As carriers of deadly diseases, mosquitoes are the deadliest insect on Earth. Each year, millions of people die from malaria, dengue fever, and yellow fever after being bitten by a disease-carrying mosquito. Mosquitoes also carry diseases that pose serious threats to livestock and pets.


With all these strikes against them, it's hard to imagine that mosquitoes fulfill any useful purpose. We forget that mosquitoes populated this planet long before man; the oldest mosquito fossils date back some 200 million years, to the Cretaceous period. Clearly, mosquitoes fill an important ecological niche. So what good are mosquitoes?

Mosquito larvae are aquatic insects, and as such, play an important role in the aquatic food chain. According to Dr. Gilbert Waldbauer in The Handy Bug Answer Book, "mosquito larvae are filter feeders that strain tiny organic particles such as unicellular algae from the water and convert them to the tissues of their own bodies, which are, in turn, eaten by fish." Mosquito larvae are, in essence, nutrient-packed snacks for fish and other aquatic animals.

Their role on the bottom of the food chain doesn't end at the larval stage, of course. As adults, mosquitoes serve as equally nutritious meals for birds, bats, and spiders.

As much as we loathe them, mosquitoes represent a considerable biomass of food for wildlife on the lower rungs of the food chain. Their extinction, were it even achievable, would have an enormous adverse affect on the entire ecosystem.
(Adapted from National Geographic magazine and www.insects.about.com)