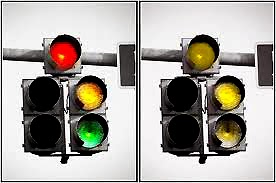 Color blindness is a defect of vision affecting the ability to distinguish colors, occurring mostly in males. It involves a person’s inability to distinguish one or more of the three colors red, green, and blue. It is noteworthy to know that the ability to see color exists in only a few vertebrates, including, among others, man and the other primates, fish, amphibians, some reptiles, and some birds; and in bees and butterflies.

The first detailed report on this condition was written by the British chemist John Dalton, who was himself afflicted with it. Total color blindness, in which all hues are perceived as variations of gray, is known as achromatopsia or monochromatism. This condition is congenital, extremely rare, and affects men and women almost equally. Partial color blindness, called dichromatism, consists generally of the inability to differentiate between the reds and the greens or to perceive either reds or greens; infrequently, the confusion may involve the blues or the yellows. Dichromatism is the most common form of color blindness, affecting about 7 percent of men and less than 1 percent of women. Dichromatism is identified as a sex-linked hereditary characteristic. Color blindness also may occur as a temporary condition following a serious illness.

The vision of most color-blind people is normal in all other respects. In addition, color-blind people can generally learn by experience to associate certain colors with varying sensations of brightness. Consequently, many victims of the defect are unaware that they are color-blind. Several types of tests have been devised for the rapid diagnosis of color blindness and of the particular variations of the condition.

Color blindness, which affects about 20 times as many males as females, is a sex-linked recessive characteristic. A woman must inherit the trait from both parents to be color-blind. A color-blind man and a woman of normal color vision have daughters who have normal color vision but are carriers of the trait—that is, the daughters may have color-blind sons and daughters who are carriers. The sons of a color-blind man and a woman with normal vision themselves have normal vision and are unable to pass the color-blind trait on to offspring. The son of a normal man and a carrier woman may be color-blind, and the daughter of such a union may be a carrier. Thus, color blindness tends to skip generations. (Adapted from Encyclopedias of Britannica and Encarta)