What was the distribution of radioactive fallout after the Chernobyl accident in Byelorussia? 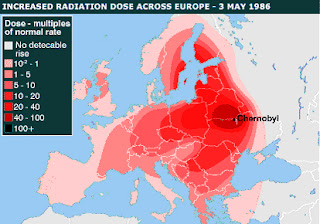 Radioactive fallout, containing the isotope cesium 137, and nuclear contamination covered an enormous area including Byelorussia, Latvia, Lithuania, the central portion of the then Soviet Union, the Scandinavian countries, the Ukraine, Poland, Austria, Czechoslovakia, Germany, Switzerland, northern Italy, eastern France, Romania, Bulgaria, Greece, Yugoslavia, the Netherlands, and the United Kingdom. The fallout, extremely uneven because of the shifting wind patterns, extended 1,200 to 1,300 miles (1,930 to 2,090 kilometers) from the point of the accident. Roughly 5% of the reactor fuel or seven tons of fuel containing 50 to 100 million curies were released. Estimates of the effects of this fallout range from 28,000 to 100,000 deaths from cancer and genetic defects within the next 50 years. In particular, livestock in high rainfall areas received unacceptable dosages of radiation. (The Handy Science Answer Book, compiled by the Science and Technology department of the Carnegie Library of Pittsburgh)