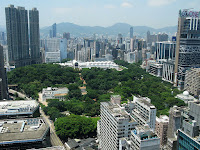 The area which was formerly the site of the Whitfield Barracks of the British Army was developed into a park in 1970. More than 70 buildings were demolished to make way for the park. The first stage of the park was officially opened on 24 June 1970 by the then Governor of Hong Kong, Sir David Trench. The first phase comprised 18 acres out of a planned 26 acres. It featured a floral clock as well as a Chinese garden set within an English landscape, which a government spokesman called "a reminder of Hong kong's cosmopolitan cultural heritage." The remaining three stages of the park development were completed by 1989.

The park houses an indoor sports centre and a large aquatics centre. The pool complex is the most heavily used in Hong Kong, serving over 2000 swimmers daily. It includes four indoor heated pools, including an Olympic sized 50-metre main pool. The swimming complex opened on 12 September 1989 and can accommodate a maximum of 1530 swimmers, and has an annual attendance of more than 1 million visitors.

One preserved historic barrack is used as a warehouse of Hong Kong Museum of History. Three other preserved buildings of the former barracks are used as museums.
(Adapted from Wikipedia)