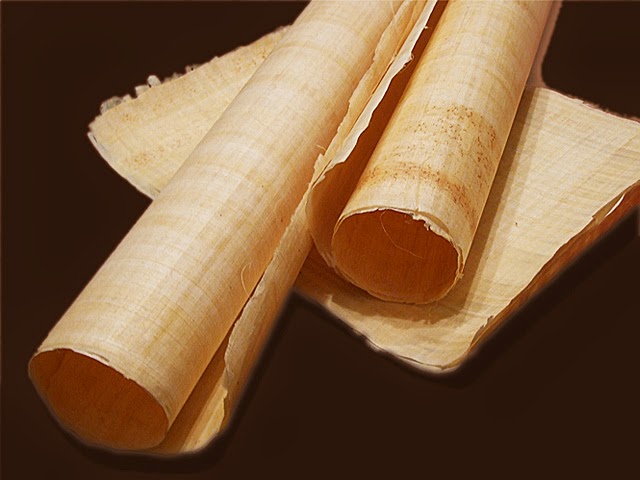 Paper has been traced to China in about AD 105. It reached Central Asia by 751 and Baghdad by 793, and by the 14th century there were paper mills in several parts of Europe. The invention of the printing press in about 1450 greatly increased the demand for paper, and at the beginning of the 19th century wood and other vegetable pulps began to replace rags as the principal source of fiber for papermaking.

The word paper is derived from the name of the reedy plant papyrus, which grows abundantly along the Nile River in Egypt. In ancient times, the fibrous layers within the stem of this plant were removed, placed side by side, and crossed at right angles with another set of layers similarly arranged. The sheet so formed was dampened and pressed. Upon drying, the gluelike sap of the plant, acting as an adhesive, cemented the layers together. Complete defibring, an indispensable element in modern papermaking, did not occur in the preparation of papyrus sheets. Papyrus was the most widely used writing material in ancient times, and many papyrus records still survive.

Papermaking can be traced to about AD 105, when Ts'ai Lun, an official attached to the Imperial court of China, created a sheet of paper using mulberry and other bast fibres along with fishnets, old rags, and hemp waste. In its slow travel westward, the art of papermaking reached Samarkand, in Central Asia, in 751; and in 793 the first paper was made in Baghdad during the time of Hārūn ar-Rashīd, with the golden age of Islāmic culture that brought papermaking to the frontiers of Europe.

The use of paper was introduced into Europe by the Moors, and the first papermaking mill was established in Spain about 1150. In succeeding centuries, the craft spread to most of the European countries. The introduction of movable type about the middle of the 15th century made book printing practical and greatly stimulated papermaking. The first paper mill in England was established in 1495, and the first such mill in America in 1690.

By the 14th century a number of paper mills existed in Europe, particularly in Spain, Italy, France, and Germany. The invention of printing in the 1450s brought a vastly increased demand for paper. Through the 18th century the papermaking process remained essentially unchanged, with linen and cotton rags furnishing the basic raw materials. Paper mills were increasingly plagued by shortages; in the 18th century they even advertised and solicited publicly for rags. It was evident that a process for utilizing a more abundant material was needed.

The increasing use of paper in the 17th and 18th centuries created shortages of rags, which were the only satisfactory raw material known to European papermakers. As a result, many attempts were made to devise substitutes, but none was commercially satisfactory. At the same time, attempts were made to reduce the cost of paper by developing a machine to supplant the hand-molding process in paper manufacture. The first practical machine was made in 1798 by the French inventor Nicholas Louis Robert. Robert's machine was improved by the British stationers and brothers Henry Fourdrinier and Sealy Fourdrinier, who in 1803 produced the first of the machines that bear their name. The solution of the problem of making paper from cheap raw material was achieved by the introduction of the groundwood process of pulp making about 1840 and the first of the chemical pulp processes approximately ten years later.
(Adapted from Britannica Encyclopedia and Encarta Encyclopedia)