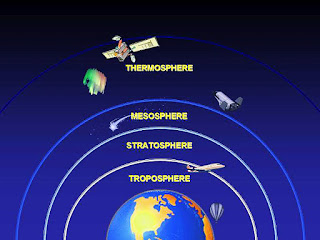 Wrapped around our planet is a thin blanket of gases called the atmosphere. It is barely thicker on the Earth than the skin on an orange – about 600 miles (1,000 km) high before it fades into black nothingness of space. Without the atmosphere, our planet would be as lifeless as the Moon. It gives us air to breathe and water to drink. It keeps us warm by the natural greenhouse effect. And it shields us from the Sun's harmful rays and from meteorites.

1. Troposphere: 0 to 7 miles(0 to 12 km)
Scientists divide the atmosphere into layers. We live in the bottom layer, called the troposphere. Compared to the rest of the atmosphere, the troposphere is a dense, thick soup, and it contains three quarters of its gases, even though it only goes up 7 miles (12 km). The troposphere is warmed by the Sun, but it gets most of this heat indirectly, reflected off the ground. The air gets thinner and colder as you go higher. Most weather is in troposphere.

2. Stratosphere: 7 to 30 miles (12 to 50 km)
There are hardly any clouds in stratosphere. Weather balloons reach this layer. Also, high altitude spy planes fly at this altitude.

4. Thermosphere: 50 to 185 miles (80 to 300 km)
During its flights, the space shuttle orbited the Earth within this layer and the one above it – the Exosphere. These atmospheric layers also display the Northern and Southern Lights (Aurorae).

Ozone
There is a thin but vital layer of the gas ozone in the stratosphere. So far, it has been enough to shield us from dangerous ultraviolet rays from the Sun. But now is is being attacked by chemical gases, such as the CFCs (chlorofluorocarbons) once used in aerosol sprays and as coolants in refrigerators. Now holes in the ozone appear over the South pole and North Pole every spring and are lasting longer each year.

Atmospheric gases
More than 99 percent of the atmosphere is just two gases. These are nitrogen (78 percent) and oxygen (21 percent). The remaining one per cent includes argon, carbon dioxide, water vapor and minute traces of other gases such as helium and ozone. (Adapted from World of Science)