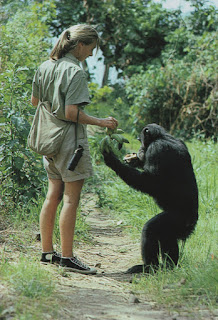 Jane Goodall - a willowy blonde who left the civilized world of England to live in the wilds of Africa to study chimpanzees. Her observations and concern for her subjects charmed everyone.

"I cannot remember a time when I did not want to go to Africa to study animals," she said in her first National Geographic article, published in August 1963. "Therefore, after leaving school, I saved up the fare and went to Nairobi, Kenya."

Dr. Louis Leakey asked her if she would consider doing a field study of chimpanzees. She leaped at the challenge and spent the next 19 months hunting down grants. When the Kenyan authorities expressed reservations about sending a single white woman into the bush alone, Goodall's mother joined her. The women set off for Lake Tanganyika in pursuit of their furry subjects. They found many. Goodall spent hours sitting quietly, trying to gain the animals' trust.

"To be accepted ... by a group of wild chimpanzees is the result of months of patience ... ," she wrote. "At last I sat among them, enjoying a degree of acceptance that I had hardly dreamed possible .... Most astonishing of all, I saw chimpanzees fashion and use crude implements - the beginnings of tool use. This discovery could prove helpful to those studying man's rise to dominance over other primates."
(Adapted from National Geographic: ‘The 20th Century’)