How did the dandelion get its name? 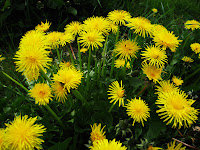 Not surprisingly, the name refers to a part of the lion. In England, before the sixteenth century, the weed was called lion's tooth because of its serrated leaf's resemblance to the lion's incisor. Later, the French translation - dent de lion - was adopted into English and eventually became anglicized to "dandelion." (The Book of Answers, by Barbara Berliner)