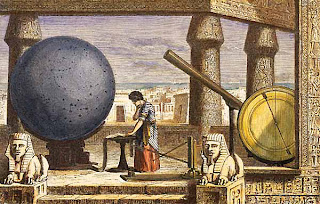 The roots of astronomy extend to before written records, but it is clear that humans have always observed the sky. The earliest known records of astronomical observations come from the Sumerian and Babylonian cultures (in what is modern-day Iraq) and date from as far back as 3000 B.C. Careful observations by court-sponsored astronomers led to the first known star maps, the zodiac, and many of the other constellations still referred to today, as well as the sexigesimal (base-60) counting system on which our angular measures are based.

Babylonian astronomers knew the length of the year to high precision. These measurements were probably used for political and agricultural purposes. During the same epoch, a number of astronomical monuments, including Stonehenge, were being constructed as calendar devices around what is now Great Britain. Egyptian astronomers undertook similar cataloging and mapping work, using stars as references in alignment of construction projects like the Great Pyramids.

Greek philosophers were the first to speculate on the structure of the universe, but were constrained by philosophical traditions relying on pure geometrical forms. Aristotle (ca.350 B.C.), established a model of the universe described as nested spheres with the Earth at the center, while the Sun, Moon, planets and stars moved around the Earth in constant motion each with its own rate.


Some Greek "natural philosophers," though, did make more detailed measurements and surmises about the structure of space. For instance, Pythagoras (ca. 500 B.C.) and Plato (ca. 400 B.C.) made strong arguments, based on the shape of the Earth's shadow during lunar eclipses and the changing view of the sky as one traveled north or south, that the Earth was a sphere. Eratosthenes (ca. 200 B.C.) estimated the diameter of the Earth to high precision based on the angle of sunlight observed at different locations. Aristarchus (ca. 280 B.C.) is the first person known to have proposed that the Earth orbits the Sun. One of the outstanding problems noted by Greek astronomers was the motions of the planets. The culmination of ancient astronomical endeavors was the work of Ptolemy (ca. A.D. 140), whose great work syntaxis was an attempt to match the complicated motions of the planets about the Earth. In his model, Ptolemy proposed that the Sun, Moon, planets, and stars moved around the stationary Earth on circular orbits onto which were placed smaller circles that carried the planets eastward, then briefly westward ("retrograde"), then eastward again relative to the fixed stars. In melding the tradition of Aristotle with an attempt to match what was actually observed, Ptolemy ensured his place in astronomical history. (The New York Times Guide to Essential Knowledge’)