The 1960s – a time of dramatic political and cultural upheaval 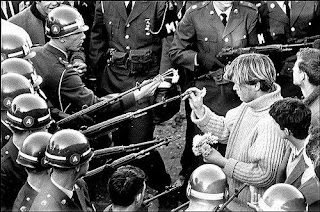 The 1960s were a time of dramatic political and cultural upheaval both in the United States and around the globe. Many date the decade's true cultural beginning to November 22, 1963, when President John E Kennedy was assassinated in Dallas, Texas. Kennedy's shocking murder seemed to be the starting point of one of the nation's most turbulent eras, a time marked by further assassinations, urban riots, mass protests, failed presidencies, an unpopular war, and new demands for equal rights and social justice. In that sense, the tumult of the 1960s did not truly end until noon on Aug. 9, 1974, when Richard Nixon became the first U.S. president to resign his office in the wake of the Watergate scandal.

It was Kennedy himself who detected change in the air as he sought to become the nation's first Roman Catholic president in 1960. Kennedy's campaign was based on an explicit critique of the 1950s and the gray-flannel administration of President Dwight D. Eisenhower. Kennedy, as the Democratic Party's nominee, argued that it was time to get the country moving again, a sentiment that many young people - the advance guard of that giant cohort known as the "baby boom” - shared.

But in fields far removed from the campaign trail, the country was already moving in a new direction. Leading the way were thousands of ordinary African Americans who were demanding an end to blatant discrimination in the South and equal justice throughout the country. The civil rights movement was already a powerful force by the time the calendar turned from 1959 to 1960. The new decade ushered in not the movement’s birth but its maturity. (The New York Times ‘Smarter by Sunday – 52 Weekends of Essential Knowledge for the Curious Mind’)