Designing for the Space Environment 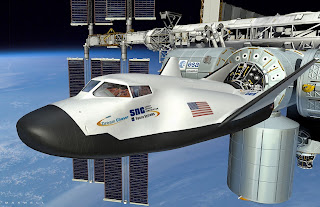 When designing vehicles for Earth orbit, the most important force to take into account is gravity, which causes both linear acceleration and rotational torque. For example, unless the space shuttle orbiter fires its maneuvering thrusters, gravity will inevitably turn the orbiter so that its nose is pointing down and one wing is pointing in the direction of travel. Building spacecraft to be durable means carrying extra weight into orbit, which is expensive, but the alternative - building a light, flimsy vehicle - is dangerous, because gravity could easily deform it.

Spacecraft designers also have to take into account harmful solar radiation. The Sun produces both electromagnetic radiation (EMR) and penetrating charged particles (PCPs). Earth's atmosphere protects life on the surface from the harmful effects of high-energy EMR, just as the planet's magnetic field shields surface life from dangerous PCPs; but in low Earth orbit, where the atmosphere is thin and the magnetic field is weak, these defenses are inadequate.

EMR travels through substances as well as empty space in waves of energy that move at the speed of light. Light is itself a form of EMR, which is generated by the vibration of charged particles. Radio waves and microwaves are relatively benign forms of low-energy EMR. On the other hand, at the high-energy end of the electromagnetic spectrum (above the range of visible light), EMR becomes ionizing, which means that it can alter the structure of molecules, including molecules of human DNA. Ultraviolet (UV) light and X-rays are examples of high-energy EMR against which astronauts and electronic equipment need to be protected.


The high energy of PCPs is also troublesome. Along with producing their own ionizing radiation, PCPs often crash computer systems by flipping polarities in their magnetic memory. All computers store information in bits of binary code, with 1 corresponding to "on" and 0 corresponding to "off." When high-energy PCPs penetrate computers, they can change "off" bits to "on," for example turning the eight-bit byte 10 10 10 10 into 11111111. Laptops left on in the space shuttle orbiter overnight typically lock up and need to be rebooted the next morning.

Engineers have not yet developed a way to protect spacecraft or astronauts from PCPs, some of which are energetic enough to pass through six feet of lead shielding. The only countermeasure currently available is to build in enough computer redundancy so that spacecraft can operate safely. Astronauts, meanwhile, can absorb the equivalent of two to three chest X-rays during each day they spend in space. (‘The Bedside Baccalaureate’, edited by David Rubel)