The rainiest place on Earth 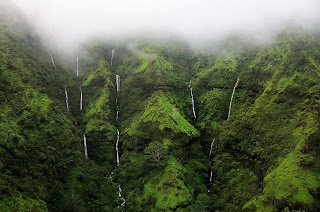 The wettest place in the world is Tutunendo, Colombia, with an average annual rainfall of 463.4 inches (1177 centimeters) per year. The place that has the most rainy days per year is Mount Waialeale (means ‘rippling water’) on Kauai, Hawaii. It has up to 350 rainy days annually.

In contrast the longest rainless period in the world was from October, 1903, to January, 1918, at Arica, Chile - a period of 14 years. In the United States the longest dry spell was 767 days at Bagdad, California, from October 3, 1912, to November 8, 1914. (The Handy Science Answer Book, compiled by the Science and Technology department of the Carnegie Library of Pittsburgh)