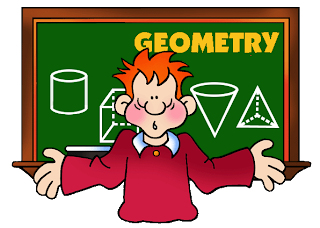 Geometry is a branch of mathematics that deals with shapes and sizes. Geometry may be thought of as the science of space. Just as arithmetic deals with experiences that involve counting, so geometry describes and relates experiences that involve space. Basic geometry allows us to determine properties such as the areas and perimeters of two-dimensional shapes and the surface areas and volumes of three-dimensional shapes. People use formulas derived from geometry in everyday life for tasks such as figuring how much paint they will need to cover the walls of a house or calculating the amount of water a fish tank holds.

Undefined terms
Some concepts central to geometry are not defined in terms of simpler concepts. The most familiar of these undefined terms are point, line, and plane.

These fundamental concepts arose from everyday experiences. Thus, the experience of where an object is leads to the idea of an exact, fixed location. This is the intuitive idea to which the term point refers. Many physical objects suggest the idea of a point. Examples include the corner of a block, the tip of a pencil, or a dot on a sheet of paper. Such things are called models or representations or pictures of points, although they show only approximately the idea in mind. Similarly, a row of points suggested by a tightly stretched string, the edge of a desk, or a flagpole, extended infinitely in both directions, is called a line. The word plane describes a flat surface—such as a floor, desktop, or chalkboard—but it is imagined as extending infinitely in all directions. This means that a plane has no edges just as a line has no ends.

Other undefined terms describe relations among points, lines, and planes, such as the relation described by the phrase “a point that lies on a line.”

Defined terms can be combined with each other and with undefined terms to define still more terms. An angle, for example, is a combination of two different rays or line segments that share a single end point. Similarly, a triangle is composed of three noncollinear points and the line segments that lie between them.

Postulates
Postulates, or axioms, are unproven but universally accepted assumptions, such as “there is one and only one line that passes through two distinct points.” A system consisting of a set of noncontradictory postulates concerning the undefined terms point, line, and plane, together with the theorems deduced from these postulates, is called a geometry. Different sets of postulates determine whole different systems of geometry.

If the postulates selected are suggested by experience with physical space, then it is reasonable to expect that the conclusions will also correspond closely to experiences related to space. However, since any set of postulates must be selected on the basis of incomplete and approximate observation, they quite possibly apply only approximately to actual space. Thus, it is no surprise if any particular geometry should turn out to be inapplicable, or only approximately applicable, to problems in actual space.

Theorems
Theorems are logically deduced from postulates. This process of deduction is called a proof. Each step of a proof must be justified by one of the postulates or by a theorem that has already been proved. One simple theorem, for example, asserts that a line that is parallel to one of a pair of parallel lines is parallel to both lines. Parallel lines are lines that are equally far apart from each other along their entire lengths.

In proving a theorem in geometry, we deduce a conclusion from a set of assumptions. (Encarta Encyclopedia)