The Origin of Language 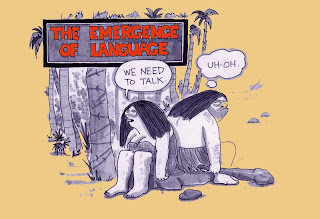 The use of language is one of the key characteristics that distinguish Homo sapiens from other primates. Because no direct evidence of language exists in the fossil record, researchers have had a difficult time inferring its development. Fortunately, the evolutionary history of the human brain and throat offers some insight.

The human brain plays a vital role in the production and comprehension of language; therefore, the emergence of language capabilities should be reflected somehow in changes to the brain's structure. If this is true, the fossil record can help. Although brain tissue doesn't fossilize, surviving crania can be used to make endocasts, which reveal the shape of the brain that the cranium being cast once held. Because studies of modern human brains have identified the areas where speech production and language comprehension take place, researchers using endocasts can trace the development of these areas over time.

Differences observed in the throat anatomies of modern humans and primates have also aided researches in making inferences about the development of language capabilities. The larynx, for example, occupies a lower position in the human throat than it does in the throats of other primates. This arrangement makes possible the large human pharynx, which produces the relatively wide variety of sounds used in human speech. There is, however, a strong disadvantage to this arrangement: a greatly increased risk of choking while eating or drinking. Therefore, language must have been a strongly advantageous trait; otherwise, the increased incidence of choking would have ensured its elimination through the process of natural selection.


Another important indicator is the hyoid, a small throat bone only rarely preserved in the fossil record. The discovery of a Neandertal hyoid bone at Kebara in Israel has led some researchers to conclude, because of its humanlike appearance, that Neandertals were capable of human speech. However, even if this were so, the capacity to produce humanlike sounds doesn't necessarily imply the ability to communicate symbolically.

Although the origin of language will always be debatable because the evidence is scarce, most researchers agree that by the Late Paleolithic, humans likely possessed a full range of language capabilities. (The explosion of symbolic behavior found in the archaeological record demonstrates the existence of symbolic communication at this time.) However, some forms of communication must have existed previously. Otherwise, early humans wouldn't have been able to pass on the complex knowledge required to make their increasingly sophisticated tools. (‘The Bedside Baccalaureate’, edited by David Rubel)