What Matter Is Made Of 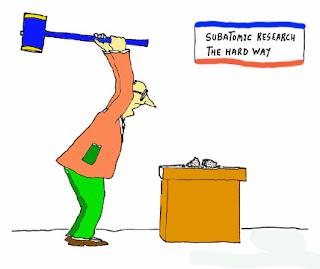 The best analogy for how we are coming to understand matter is the peeling of an onion. We peel off one layer and penetrate to a deeper one, only to discover that there is yet another to work on. The first layer was peeled off our onion in 1805, when British chemist John Dalton published the modern atomic theory of matter. He showed that the enormous variety of substances that surround us is made up of only a few different chemical elements, each of which has its own type of atom. In the early twentieth century the second layer was peeled off when the structure of the atom was revealed. All of the different kinds of atoms, it was argued, were made up of only three kinds of elementary particles – protons and neutrons in the nucleus and electrons orbiting the nucleus; this picture of the atom would become more or less standard. For a while, its inherent simplicity seemed to be clouded when it was found that there were not just two types of particles inside the nucleus, but hundreds. Most of these appeared and disappeared too quickly to be seen, but they could be produced independently in accelerators.

In the mid-1960s, yet another layer was peeled off. It was pointed out that the myriad elementary particles are actually made up of a small number of still more basic entities called quarks. Quarks are held together by particles called gluons -- they're the Elmer's that keeps the three quarks of a proton or neutron together. Scientists believe that these particles derive from an even more basic form of matter called quark-gluon plasma, a primordial soup that made up the universe ten millionths of a second after the Big Bang. As things cooled down, this liquid went through "hadronization," hardening into protons and neutrons, which in turn coalesced first into nuclei, then into atoms. After that, the atoms came together to form molecules, which eventually transformed into you, this book, and the easy chair you're sitting in. At least, that's the theory. (‘An Incomplete Education’, by Judy Jones and William Wilson)