How Tuesday got its name 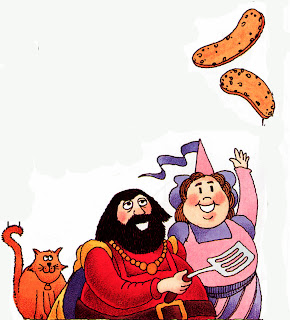 The Romans named the third day of the week dies Martis, for Mars, the god of war. It is still known as mardi in French and as martes in Spanish. The Germanic people used the name of their own war god, Tiu -- giving us the name Tuesday.

A few Tuesdays have special importance. The Tuesday after the first Monday in November is Election Day in the United States. People go to the polls to choose the officials who will run the government.

In the Christian calendar, Shrove Tuesday comes right before Lent, -- the 40-day period of prayer and fasting that leads up to Easter. It's -- the last chance for people to eat, drink, and make merry. In days gone by, people tried to use up all the butter and other fats they had on this day because they would have to give up fats during Lent. Rich, buttery foods became a Shrove Tuesday tradition. So this day is also known as Pancake Tuesday, and as Fat Tuesday (or Mardi Gras, in French).

Today some cities still hold Mardi Gras parades and festivals. The Mardi Gras celebration in New Orleans is one of the most famous. But most Tuesdays are just ordinary days. And Tuesdays of the past were pretty dull: Just as Monday was washday, Tuesday was ironing day. (Grolier New Book of Knowledge Encyclopedia)