Birth of a Tornado 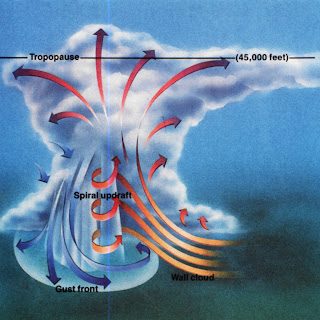 A mesocyclone (or supercell) is a highly developed and dangerous thunderstorm. As its central updraft spirals skyward at 60 miles per hour, reaching heights of more than 45,000 feet, a bulging wall cloud starts protruding from the storm's base. The wall cloud's core may begin to rotate rapidly, leading it to lower a spinning funnel, which usually evolves into a tornado.

Tornadoes can strike anywhere in the United States, which has more tornadoes than any other country. (A tornado is any rapidly rotating column of air that touches the ground. In the air, it's called a funnel cloud.) Tornadoes are most apt to occur during the late-afternoon and evening hours in the spring and fall, when the air is least stable.

"First there has to be a favorable area for thunderstorms to form - an unstable air mass in which the wind direction turns with height," says NSSL meteorologist Dr. Edward Brandes. "If the air is then lifted by a passing cold front or rises because of daytime heating, a mesocyclone - a severe thunderstorm with a powerful rotating updraft -may develop." With few exceptions, tornadoes are born mesocyclones. Once they spot a mesocyclone, forecasters know they're dealing with a fierce storm that produces 3/4-inch (1 3/4-centimeter) hail and winds blowing at a minimum of 60 miles (96.5 kilometers) per hour. Says NSSL meteorologist Doug Forsyth: "It also means there's a fifty-fifty chance of a tornado."

Meteorologists aren't sure why some mesocyclones produce tornadoes and others don't. And though they've learned from video recordings and direct observations that tornadoes almost always form in the right rear quadrant of a severe storm, they don't know why. But they've learned a great deal since the early 1970s, when they first began chasing tornadoes across the plains with scientific instruments.

For one thing, meteorologists have learned that tornado wind speeds don't exceed 300 miles (480 kilometers) per hour. And they've discovered that although a tornado's atmospheric pressure may be as much as 2.9 inches of mercury (100 millibars) lower than the surrounding air pressure, that isn't enough to make a building explode. So it isn't necessary to open your windows when a tornado approaches.

But there's still much that meteorologists don't understand about tornadoes. What triggers them? Is lightning a factor? Why are most tornadoes relatively weak while a few are monsters? Why do some have longer damage paths? Do wind speeds change during a tornado's lifetime? Does a mile-wide tornado have stronger winds than a smaller tornado?

To answer these questions, tornado researchers are using Doppler-radar devices, their most important tools. There are several sizes of Doppler radars, including large stationary dishes and smaller portable ones. All emit microwaves that are reflected back to a receiver by moving particles, such as water droplets or hail.

Conventional radars can detect thunderstorms, but they can't tell meteorologists whether a storm's winds are rotating. Doppler devices can identify a mesocyclone. Dopplers can also spot wind shear-sudden gusts near the ground. And vertical wind shears may indicate a likelihood of tornado development two to four hours before it occurs. (Grolier New Book of Knowledge Encyclopedia)