The Disarming Armadillos – helped us with the discovery of leprosy vaccine 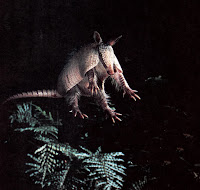 On the surface, the armadillo hardly seems like celebrity material. Its body looks like a conglomeration of some of nature's most bizarre features: the figure of an overgrown sow bug, possumlike ears, turtle feet, lizard skin, and a dinosaur's tail. Draped over its back is a thick, medieval-looking cape called a carapace. Patches of coarse hair cover its armored body, and scent glands at the base of its tail give off a pungent, musky odor. "You could say it's not an animal we humans can easily relate to," says armadillo expert Eleanor Storrs, a professor of biology at the Florida Institute of Technology in Melbourne. Even so, a remarkable discovery she made in the 80’s thrust the creature from the shadows of anonymity into the glare of scientific fame: the armadillo is one of the few creatures besides people that can contract leprosy.

The discovery toppled a barrier that had stalled research on the disease for more than a century, and in the process pushed the armadillo into a position of importance. Now, however, many researchers believe the leprosy connection may just scratch the surface of the animal's trove of secrets.

"It's really a remarkable animal, and there's still so little known about it," says Storrs, who first became fascinated by the creatures nearly three decades ago. Since then the 62-year-old biochemist, who is director of the school's Comparative Mammology Laboratory, has found that under the armadillo's primitive upholstery lies a shy but intriguing animal with a vast repertoire of unusual traits. The more she peers under the armor, she says, the more remarkable it becomes.

Of the 20 or so types of armadillo, Storrs has focused on Dasypus novemcinctus, the nine-banded species, which ranges from Argentina to the southern United States, and is the only variety found in the US. Although it can't roll up in a ball like its three-banded cousin, the nine-banded armadillo can leap straight up in the air (a habit that often proves fatal in encounters with cars). Like a mini-submarine, it can fill itself with air and float, or expel the air and sink.

Unlike any other mammal, the armadillo produces four genetically identical offspring almost every time it gives birth. In addition, the nine-banded species practices family planning: a unique time-release mechanism allows it to postpone delivery until conditions seem safe.

Armadillos, anteaters, and tree sloths are all that is left of Xenarthra, an ancient order of animals that flourished 55 million years ago in South America. The animals made their way into what is now the United States when the land bridge between the two continents formed, only to vanish mysteriously some 10,000 years ago.

Among the survivors in Central and South America was the nine-banded armadillo, which weighs from 6 to 10 pounds (2.5 to 4.5 kilograms). In the 1850s a group of the creatures appeared in Texas and swiftly spread through the Gulf states toward the Atlantic.

To cross the Mississippi and other large rivers, the animals may have hitched rides on logs, says Storrs. When they came to a creek or narrow stream, they probably just floated across, buoying themselves by gulping air into their stomachs or intestines. Or they might have used a technique she and her husband, biochemist Harry Burchfield, observed while stalking an armadillo in Texas. The creature scurried into a stream and sank to the bottom. After about five minutes, it strolled out on the other side.

Texas Horde
In 1922, while the migrants were making their eastward journey, a pair of captive nine-banded armadillos escaped from a small zoo near Cocoa, Florida. Soon the state was crawling with tens of thousands of the creatures, all thought to be descendants of this Adam and Eve.

The Texas horde reached the Florida panhandle in the late 1970s, and probably met up with their East Coast kin during the 1980s. Today an estimated 30 million armadillos roam the southern United States. Reactions to their arrival have been mixed. One armadillo can eat 200 pounds (90 kilograms) of insect pests a year, so some people consider it an ally. But homeowners whose yards have been turned into Swiss cheese by the restless burrowers are less hospitable.

Using their heads as shovels, armadillos carve out passageways to underground dens. They come out to feed in late afternoon. Their eyesight is poor, but a superb sense of smell allows them to locate insects as deep as 6 inches (15 centimeters) underground.

Time-Release Family Planning
The armadillo might not win many animal intelligence contests, but, as Burchfield points out, "it's been very successful." The creature owes its staying power in part to the routine consistency of its quadruplet births. Only the nine-banded armadillo and a few close cousins in South America regularly produce litters of four pups from the same fertilized egg.

"Basically," says Burchfield, who taught biology at the Florida Institute of Technology, "the armadillo produces only one ovum per year, which normally would limit its chances of reproduction." However, the development of polyembryony (multiple embryos from one egg) "increases the litter size by a factor of four, a much more favorable position."

Another startling reproductive talent plays perhaps an even larger role in the species' success. Armadillo females can suspend their pregnancy for up to two years, an ability unheard of elsewhere in the animal world. Scientists have known for years that a small number of mammals can delay for several months the implantation of the embryo in the uterine wall. But only recently has Storrs begun to appreciate the armadillo's "superdelay."

At first, when captive armadillos at her laboratory began giving birth long after their last contact with males, "we figured we must have made a mistake or overlooked something," says Storrs.

She began to suspect a delay in March 1986, when five of the seven females she had sent to a lab in England gave birth. The animals had not been near males since their capture in November 1984. Says Burchfield: "The nicest part about it was that it didn't happen in our laboratory -no one would have believed it."

After the egg is fertilized, the early embryo -a free-floating ball of cells called a blastocyst -embeds itself in the uterus and begins to grow. But sometimes, says Storrs, "instead of remaining free-floating for two or three months, as is normal, this blastocyst goes on free-floating for an additional 12 months, or even 24 months, before implanting."

She believes the delay could be a reaction to stress, which might cause other species to abort. By postponing the implantation, she suggests, the armadillo can wait out the stressful conditions and give its litter a better chance of surviving.

Potential Lepers
At Storrs' lab in Melbourne, the walls are stacked with hundreds of "convertible pet apartments," each occupied by one armadillo. Eventually these animals become part of a crucial leprosy study. Their bacteria-laden tissues are harvested, frozen, and sent to research labs worldwide.

Thanks to the armadillos, scientists have made great strides toward conquering the ancient disease, which still affects some 15 million people worldwide, including 4,000 in the US. First identified 3,000 years ago, leprosy in humans is seldom fatal, but produces skin and nerve lesions that, left untreated, can cripple or severely disfigure.

Fighting leprosy was the farthest thing from Storrs' mind in 1963, when, as a newlywed biology student at the University of Texas, she became intrigued by the regularity of armadillo quadruplets. Working on her doctoral thesis, she began studying captive animals. Then, in 1968, after the couple moved to Louisiana, Storrs got a grant from the National Institutes of Health (NIH) to study armadillo reproduction. But a casual remark changed the course of her research-and her life.

That year, members of the U.S. Leprosy Panel visited Burchfield, then a biochemist with Gulf South Research Institute. They wanted to know about a technique she had suggested for testing the antileprosy drug dapsone.

During their visit, they mentioned some of the problems with studying the disease. Though the leprosy-causing bacillus was discovered in 1873, no one could make it grow in the laboratory. And because there was no animal "model," scientists had to rely on tissue removed from people.

The visitors pointed out that leprosy attacks cooler areas of the body such as the nose and ears. From her work, Storrs knew that the armadillo's body temperature, at 92 to 95 F (33 to 35 C), was lower than a human's. Playing on a hunch, she blurted out, "Has anyone ever tried the armadillo?" As it turned out, scientists had tested everything from fish to buffalo to monkeys, but never armadillos.

In 1969, with a grant from the Centers for Disease Control (CDC), Storrs set out to test her theory. She chuckles about it now: "We didn't have any background showing that armadillos would develop leprosy, and the odds that they would were pretty remote. It was a shot in the dark."

The shot hit its mark two years later, when an armadillo she was working with developed the disease. Laszlo Kato, director of leprosy research at Catherine Booth Hospital in Montreal, recalls his reaction: "Eureka! For decades we prayed for an animal model. Then this shy, kind person came along and said, 'Here it is.'"

Storrs took her armadillo colony to Melbourne in 1977, so she could maintain it with the help of grants from the World Health Organization (WHO) and other groups. Before her discovery, scientists were no closer to a leprosy vaccine than were the physicians of the Middle Ages. Now the best hope of wiping out one of mankind's oldest scourges lies with this scaly throwback to the days of dinosaurs. (Funk & Wagnalls new Encyclopedia of Science Yearbook)