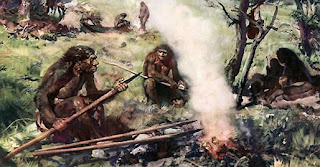 Archaeological finds in Israel have shed new light on the role of the Neanderthal in human evolution. Remains of some 400 Neanderthal individuals have been found throughout Europe and in western Asia, dating from between 120,000 and 40,000 years ago. For many years, scientists had believed that either modem humans replaced Neanderthals, out-competing them because of superior intelligence, or that Neanderthals evolved into modem humans. The evidence from the Israel site suggests that modem-type humans coexisted with Neanderthals, possibly for as long as 50,000 years. The evidence also raises questions about interaction, cooperation, competition, and communication between these anatomically different humans.

Another important new discovery about Neanderthals was also made in Israel. At Kebara Cave was found the first well-preserved specimen of a Neanderthal hyoid bone --part of the structure of the throat used for speech. Scientists long had debated whether or not Neanderthals could speak, with part of the argument resting on anatomical differences between Neanderthals and Homo sapiens sapiens. The Neanderthal hyoid's similarity to the hyoid in modem humans would seem to imply a Neanderthal capability to make sounds similar to those of modem humans. (Funk & Wagnalls new Encyclopedia of Science Yearbook)