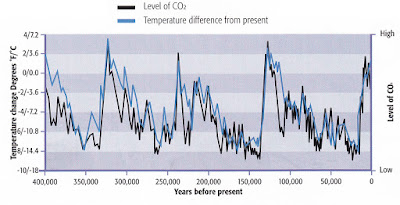 Much of human history unfolded during the dramatic climatic shifts of the most recent ice age which began about 2.5 million years ago. Our ability to adapt to changes in climate has been crucial to the development of civilization but our own activity may now be causing dangerous global warming.

An ice age is a period during which the Earth is cold enough to develop extensive ice sheets. These sheets build up over years when snowfall fails to melt in summer and become blankets of ice thousands of feet thick. Such sheets today cover Antarctica, Greenland, and some high mountains, but during glacial periods (the coldest parts of an ice age), global temperatures drop a few degrees, leading to much larger ice sheets.

At the height of the last glacial period, 20,000 years ago, ice sheets formed over Scandinavia and covered most of Canada and parts of the United States as far south as modern Seattle and the Great Lakes. Great glaciers formed on the Alps and there were ice sheets on the Pyrenees, on the Andes, and on Central Asian mountains and high altitude plateau. Nothing lives on the ice – all life retreats south to places that support some plant growth in summer. We are now enjoying a relatively warm period known as an interglacial. Any ice age fluctuates between these interglacials, which are brief intervals of warmer conditions, and glacial periods - longer stretches of intense cold. When we talk about the Ice Age, we are referring either to the entire cold period (the Pleistocene) or to the last glacial period, which ended between 15,000 and 10,000 years ago.

We have a clear picture of Ice Age climate back to around 780,000 years ago from layers of sediment in deep sea cores and the composition of ice deep inside polar ice caps. At least nine glacial periods have come and gone over this time. As a rule, cooling proceeds relatively slowly and warming unfolds rapidly, as was the case at the end of the last glacial period.

These increases in temperature are caused by changes in the Earth's path around the Sun and its rotation on its axis. Natural increases in greenhouse gases add to the warming. Our current interglacial period was caused by these natural phenomena.
('History', by Adam Hart-Davis)