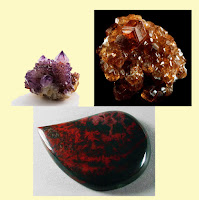 They are gemstone associated with the date of one's birth, the wearing of which is commonly thought to bring good luck or health. Supernatural powers have long been attributed by astrologers to certain gemstones.

The stones now associated with each month have only slight relationship to the ancient beliefs, for the list is tempered by availability and cost. Before mineralogy had progressed to the point of chemical analysis, colour was of greater importance than some of the other physical characteristics, and little distinction was made between emerald and chrysoprase, for example, or between ruby and garnet, or between citrine and topaz. When it came to the ability to heal or bring good luck, the actual stone and the look-alikes were regarded as equally effective. Even the names used in ancient times do not necessarily refer to the stones that go by those names in the 20th century; the sapphire of the Bible is much more likely to have been lapis lazuli than what is now known as sapphire, and adamas (diamond) was probably white sapphire or white topaz. (Britannica Encyclopedia)