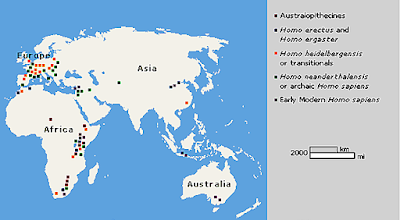 Scientists have discovered the bones and artifacts of early humans in many parts of Africa and Eurasia. The earliest humans, known as australopithecines, lived only in Africa. The modern human genus, Homo, also evolved in Africa, but several middle and late Homo species migrated to Europe and Asia. Early forms of Homo sapiens, or modern humans, lived in Africa and Asia. Only fully modern humans populated the rest of the globe.
(Encarta Encyclopedia)