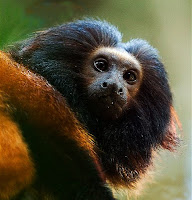 "There's nothing new under the sun" is an old saying - but not necessarily a true one. In June, 1990, scientists in Brazil announced that they had discovered a new kind of monkey on an island off that country's coast. The squirrel-sized primate, a species of lion tamarin, has golden fur with a black face, forearms, and tail. Scientists named it Leontopithecus caissara, or black-faced lion tamarin. There are three other kinds of lion tamarins in Brazil. The black-faced monkeys, isolated on their island, had gradually developed different traits from those of their mainland relatives. Scientists said that the discovery showed the importance of finding new species before their habitats are destroyed by development. (Adapted from Grolier Book of Knowledge Encyclopedia, and Internet Sources)