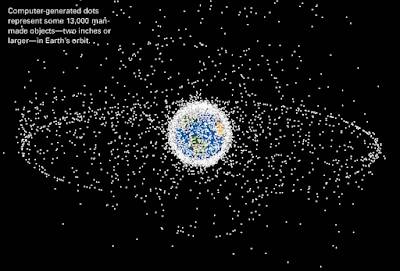 Even a tiny paint flake left floating in orbit can pit the window of a space shuttle traveling 17,500 miles an hour. To avoid catastrophic collisions, the Department of Defense tracks pieces of orbiting space junk larger than two inches. Debris orbiting relatively close to Earth, such as a glove that drifted away in 1965 from Edward White or an eyebolt shaken loose from a solar panel on a Russian spacecraft in 2004, quickly burn up in the atmosphere. Items in higher orbit remain aloft for generations: The Vanguard 1 satellite will fly for centuries. Space agencies are pondering ways to sweep such junk out of the path of collision. Meanwhile, Australian archaeologist Alice Gorman is lobbying for the creation of an international treaty that would designate certain satellites, such as the Vanguard 1, as treasures of cultural heritage. One day, she says, they may even beckon space tourists.
(National Geographic, Jan. 2007)