A Tale of Three Humans 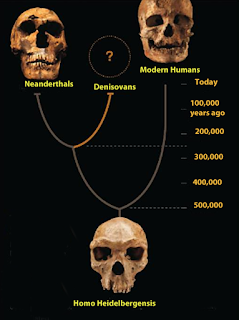 A third kind of human, called Denisovans, seems to have coexisted in Asia with Neanderthals and early modern humans. The latter two are known from abundant fossils and artifacts. Denisovans are defined so far only by the DNA from one bone chip and two teeth – but it reveals a new twist to the human story.
(National Geographic, July 2013)