Saturn – one of its moons is bigger than Mercury 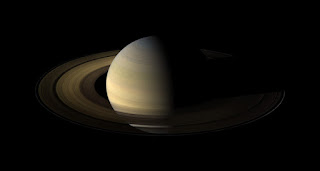 Like fellow gas giant Jupiter, Saturn is a massive ball of mostly hydrogen and helium. Surrounding by 53 confirmed and nine provisional moons, Saturn is home to some of the most fascinating landscapes in our solar system. Like Jupiter, Saturn is mostly made of hydrogen and helium, the same two main components that make up the sun. Saturn rotates in the same direction as the Earth, which is west to east, but it does this far faster than Earth, spinning around once in just 10.7 hours. While the days on Saturn are short, the years are long. The sixth planet from the sun takes 29 Earth years, or 10,756 Earth days, to complete one revolution around the sun. As a gas giant, Saturn doesn't have a true surface. The planet is mostly swirling gases and liquids. While a spacecraft would have nowhere to land on Saturn, it wouldn't be able to fly through unscathed either. The extreme pressures and temperatures deep inside the planet would crush, melt and vaporize a metal spacecraft trying to fly through the planet. Like Jupiter, Saturn is made mostly of hydrogen and helium. At Saturn's center is a dense core of rock, ice, water, and other compounds made solid by the intense pressure and heat. It is enveloped by liquid metallic hydrogen, inside a layer of liquid hydrogen -- similar to Jupiter's core but considerably smaller. It's hard to imagine, but Saturn is the only planet in our solar system that is less dense than water. The giant gas planet could float in a bathtub -- if such a colossal thing existed. Saturn's largest satellite, Titan, is a bit bigger than the planet Mercury. Titan is the second-largest moon in the solar system; only Jupiter's moon Ganymede is bigger.
(Adapted from Encarta Encyclopedia and NASA site https://solarsystem.nasa.gov)