Condition of women in the 19th century Islamic world 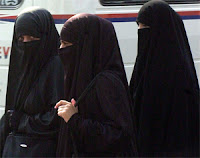 Among the Muslim communities of the Middle East, women lived entirely under the domination of men and were not allowed to take part in public affairs. Girls grew up in the home of their parents, lived most of their time indoors and had no contact with the public. When they were given in marriage to their husbands (an event over which they had no control), they moved into a different house and spent most of their time in complete seclusion until they died. No man, except a very close relative, was ever allowed to see the face of a woman. She had to wear a chadur [1] and veil her face. It was considered a sin for a woman to show her face to any man. When a male guest arrived at a home, all the women had to retire into the inner apartment, their sanctuary where no strange man would ever be admitted.

Another restriction was that women, especially unmarried girls, were not to talk to men. Neither would they be permitted to go out for shopping or other services; these were the exclusive preserve of men. Such acts would have necessitated women taking part in public affairs and coming into contact with men. So strong was this restriction that if ever a woman was seen talking to a strange man she would receive very severe punishment from her parents or husband. The stigma attached to this behaviour was so repugnant that sometimes the poor victim would commit suicide. Some Muslim clergy in Persia are known to have inflicted torturous chastisements upon a man who was accused of talking to a woman. Usually a much more severe punishment awaited a non-Muslim man if he was found speaking to a Muslim woman.


Women in those days had no status in the community. They were treated like objects. Some members of the clergy went so far as to claim that women had no souls, much as Christian theologians had done seven hundred years earlier. Within such a society a woman's life was spent almost entirely within the four walls of a house; caring for her family and the menfolk who lived there. It was very rare for a young girl to receive any education. The great majority of women were illiterate and were therefore left out of the mainstream of human progress and civilization. Even the few who received some education were circumscribed in their activities. Parents were responsible for providing a son with his livelihood, his home and all his needs -- including a wife, who would be given to him as a matter of routine. Parents arranged their children's marriages and usually the parties most concerned had no say in the matter.

In the Western world today, a couple meet and get to know one another, fall in love and get married. But during the 19th century this was not the case in the East and often not in the West either. 'Love' took second place to family duty, appropriate social ties and questions of inheritance.

It was customary to betroth a boy and a girl soon after they were born and when the boy reached his late teens he had to marry; the couple had no choice. There was no question of the partners loving each other before their marriage; the boy was not even allowed to see the face of his bride until after the wedding. If the two parties were not betrothed so young, the parents would usually seek a bride for their son once he was in his teens. This was done by a female member of the family, his mother or a sister. Once the choice was made, the marriage could take place. All the young man saw of his future wife was a figure wrapped in a chadur and heavily veiled. If he was fortunate, his female relatives had perhaps described to him what his bride really looked like.

Although couples were not in a position to choose their partners in marriage and had no possibility of knowing and loving each other, not all marriages were devoid of love and unity. It is not difficult to visualize the case of a couple, unacquainted with each other initially, who develop a bond of friendship, love and harmony after marriage. Yet within such an environment, the dominant position of the husband was noticeably upheld as he exercised unquestioned authority over his wife.

In these circumstances all the responsibility of running the home -- which entailed hard labour in those days -- was left to the wife, who would be lucky if there were other female members of the family to help her in her duties. It was considered improper to employ a maid to assist in the work, since only a woman who was a close relative could be admitted into the household. However, since polygamy was commonly practised, a man could usually marry up to four wives and they were expected to assist each other in managing the family home. This often became a necessity where the husband was wealthy and influential and had to maintain a large household and conduct a lifestyle befitting his station in society. It was usually the first wife who would seek out, or give her consent for, the second wife.

It is clear that marriage customs in Persia during the 19th century are not comparable to those now current in most parts of the world. The mere mention of polygamy today will raise in people's minds associations of sex, lust and corruption. But this was not true in the case of people who contracted marriages according to Islamic law over a hundred years ago. Men practised polygamy not necessarily from lust but because they were conducting their lives within a society that had established certain customs and conventions to which all had to conform. Thus a young man happily submitted his will to that of his parents and carried out their wish in marrying someone of their choosing; thereafter he contracted further marriages as a routine matter.
- Adib Taherzadeh  (‘The Child of the Covenant’)
[1] A large piece of cloth which covers the entire body from top to toe and is wrapped around one's clothes