Year: 1848 – Some happenings in Europe and America 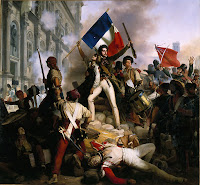 The year 1848 was a year of revolution in Europe. Uprisings occurred in France, Germany, Austria, Italy, and Great Britain. Ordinary people everywhere were demanding change. Farmers, merchants, and craftsmen were no longer content to see their rulers live in splendid comfort while their own families lived difficult, impoverished lives. They wanted affordable food, the ability under the law to own land, and they wanted a society that treated them justly. In certain places people who spoke the same language wanted their own independent nation. Many people demanded a voice in electing the leaders who governed them. Some read a new pamphlet by Karl Marx titled The Communist Manifesto. Marx did not put his trust in religion to change society, but in revolution. If people wanted justice, he wrote, the proletariat -- the working class -- must revolt against the rulers and the wealthy.

Those in power, long accustomed to doing what they pleased, were slow to respond. When the French National Assembly wrangled in disagreement over reforms, angry citizens broke into its chambers and overran the Assembly. King Louis-Philippe was forced to flee the country. In the ongoing struggle for reform, the French fought bloody street battles. They were not alone.

Newspapers, with the aid of the newly invented telegraph, carried the news of protests and revolts from one country to the next. More people than ever before could read, and the news of one revolt would inspire people in other places to take action themselves. The spirit that blazed in one country soon caught fire in the next - and the fire would not be put out.

Others sought change in more peaceful ways. In 1848 peace itself was the topic at an international conference in Brussels, the second in a series of peace conferences. Slavery roused people to action on both sides of the Atlantic. It had been abolished throughout the British Empire, but America was divided over the issue - its states half slave and half free. Abraham Lincoln, a newly elected congressman from Illinois, could see a short distance from the Capitol building the slave pens crowded with black men and women kept in iron manacles. He voiced the mind of many when he later wrote to a friend, "If slavery is not wrong, nothing is wrong."'

By 1840, more than two hundred thousand Americans became abolitionists, organizing as many as two thousand antislavery groups to speak out against slavery and the laws that sanctioned it. Among their members was Frederick Douglass, who had escaped from slavery in Maryland to become a free man in Massachusetts. An eloquent speaker and writer, Douglass also belonged to a daring network known as the Underground Railroad-people who put themselves at risk to help runaway slaves escape to freedom.

Many at the forefront of the abolitionist movement were inspired by their religious beliefs. Among them was the older Lucretia Mott, a Quaker activist who met the younger Elizabeth Cady Stanton in London at the 1840 World Anti-Slavery Convention. When convention organizers would not allow any women to participate, the two were astonished and infuriated. Refused even a seat in the main hall, they were seated behind a curtain in the gallery.

It was there in London that Elizabeth Cady Stanton and Lucretia Mott first talked about a convention to address the rights of women. But it was not until the summer of 1848 that the two American women convened the first women's rights convention. On July 19, three hundred women and men gathered at the Wesleyan Chapel in Seneca Falls, New York, where for two days they listened, debated, and finally accepted the Declaration of Sentiments drafted by Elizabeth Cady Stanton.

The Declaration of Sentiments called for equal rights in education, religion, and law - including the right to vote. Frederick Douglass was present at the convention and became one of their staunchest supporters. "We hold woman to be justly entitled to all we claim for man." he wrote in his newspaper, the North Star.

News of the convention and its Declaration of Sentiments traveled by telegraph to newspapers throughout the country. It sparked heated debate, a debate welcomed by Elizabeth Cady Stanton. "It will start women thinking, and men, too," she said, "and when men and women think about a new question, the first step in progress is taken." She was looking for a new mind and a change of heart as much as a change in law.

A spirit of change was stirring in the world…
(Adapted from ‘The Story of Baha’u’llah’, by Druzelle Cederquist)