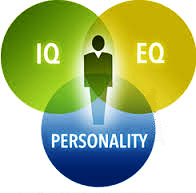 In recent years a number of theorists have proposed the existence of emotional intelligence that is complementary to the type of intelligence measured by IQ tests.

Emotional intelligence is the ability to recognize one's own and other people's emotions, to discriminate between different feelings and label them appropriately, and to use emotional information to guide thinking and behavior.

American psychologists Peter Salovey and John Mayer, introduced the concept in 1990. Emotionally intelligent people can use their emotions to guide thoughts and behavior and can accurately read others’ emotions. Daniel Goleman, an American author and journalist, popularized the concept in his book Emotional Intelligence (1995). He expanded the concept to include general social competence.

There are three models of EI. The ability model focuses on the individual's ability to process emotional information and use it to navigate the social environment. The trait model encompasses behavioral dispositions and self perceived abilities and is measured through self report. The final model, the mixed model is a combination of both ability and trait EI. It defines EI as an array of skills and characteristics that drive leadership performance.

Studies have shown that people with high EI have greater mental health, exemplary job performance, and more potent leadership skills. Markers of EI and methods of developing it have become more widely coveted in the past few decades. In addition, studies have begun to provide evidence to help characterize the neural mechanisms of emotional intelligence.

Criticisms have centered on whether EI is a real intelligence and whether it has incremental validity over IQ and the Big Five personality traits.
(Adapted from Encarta and Wikipedia Encyclopedias)