Global undernourishment shouldn't exist. Each day the world's farmers produce the equivalent of 2,868 calories per person on the planet -- enough to surpass the World Food Programme's recommended intake of 2,100 daily calories and enough to support a population inching toward nine billion. The world as a whole does not have a food deficit, but individual countries do.

Why do 805 million people still have too little to eat? Access is the main problem. Incomes and commodity prices establish where food goes. The quality of roads and airports determines how easily it gets there. Even measuring undernourishment is a challenge. In countries with the highest historical proportions of undernourishment, it can be hard to get food in and data out.

Things are slowly getting better. Since the early 1990s world hunger has dropped by 40 percent -- that means 209 million fewer undernourished people, according to the Food and Agriculture Organization of the United Nations. Future progress may prove difficult. "It is critical to first improve overall food production and availability in places like sub-Saharan Africa," says FAO economist Josef Schmidhuber. "Then one can focus on access."
(Daniel Stone, National Geographic Magazine, December 2014) 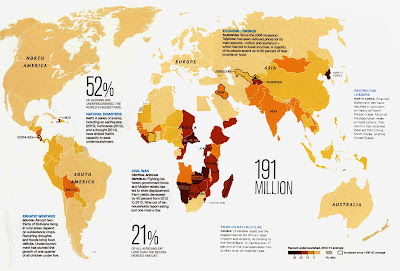