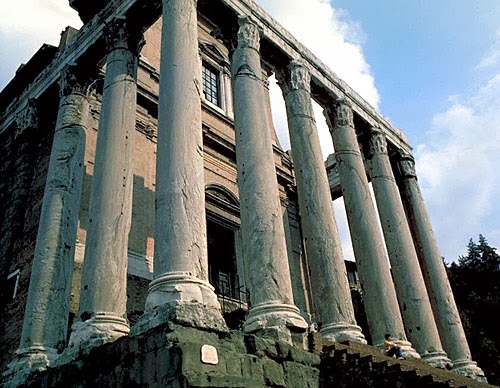 The first European music is that of the ancient Greeks and Romans, dating from roughly 500 B.C. to A.D. 3OO. Fewer than a dozen examples of Greek music from this period, written in an alphabetical notation, survive. Ancient Greek philosophers believed that music originated from the god Apollo, as well as from the mythological musician Orpheus and other divinities. They also believed that music reflected in microcosm the laws of harmony that rule the universe, and that music influenced human thought and actions.

The Greek philosopher Pythagoras (ca. 580 B.C.-ca. 500 B.C.) discovered the mathematical relationships between specific frequencies and musical inrervals, using a single-string instrument (called a monochord) to produce the various intervals. For example, two notes whose frequencies form a ratio of 2:1 sound one octave apart; a ratio of 3:2 forms an interval of a fifth, and a ratio of 4:3 forms a fourth. These basic intervals combine to create the modes and scales on which all Western melodies and harmony are based.

Aristotle (384 B.C.- 322 B.C.), in his treatise The Politics, noted that different musical melodies, modes, and rhythms have different effects on the listener. He argued that since music has the power of forming character, it should be an important part of the education of the young. His student, Aristoxenus of Tarentum (364 B.C.- 304 B.C.), in his Elements of Harmony, formalized the Greek scheme of modes, which utilize a limited series of pitches defined by set intervals. These modes predated the modern major and minor scales that came to prominence in the 16th and 17th centuries.

Greek music was primarily monophonic, meaning that there was a single melodic line without any harmony or accompaniment. In song, the music duplicated the rhythms of the text; in instrumental pieces, the melody followed the rhythmic patterns of the various poetic feet. The internal structure of Greek music was based on a system of modes, similar to that used in Arab and Indian music today.

The musical principles and ideas developed by the Greeks were preserved by the Romans throughout their history. Roman music was also influenced by the music of the many kingdoms conquered by the Roman Empire. From 27 B.C. to A.D. 192, slave musicians and dancers were recruited throughout the Empire, musical theater flourished, and both Greek and Roman musicians had their own professional organizations. (‘The New York Times Guide to Essential Knowledge’)