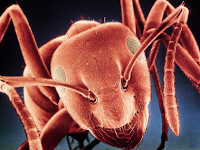 Most ants have two compound eyes, which are made up of light-sensitive compartments called ommatidia. These compartments work together to generate an image in the ant’s brain. Some types of ants have three simple eyes, called ocelli, at the top of their heads. Ocelli can detect light, but they do not form images. Different species of ants vary in their ability to see: Some have well-developed sight, but others are entirely blind. Sight is of little importance to those ants that spend all or much of their lives underground.

Attached to the front of the head is a pair of flexible, segmented appendages called antennae, which contain organs of taste, smell, and touch. Each antenna is shaped like a human arm that is bent at the elbow. This antennae shape is an identifying feature of ants. Antennae are an ant’s main source of information about the world. When an ant is active, its antennae are in nearly constant motion—tapping the ground or vegetation, other ants, and food sources, or sampling odors from.
(Encarta Encyclopedia)